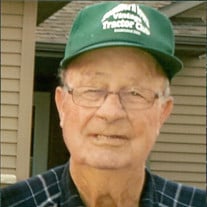 Raymond Edward “Ray” Reed, age 88, of Albia, passed away on Wednesday, December 16, 2020, at his home in Albia under the care of EveryStep Hospice and surrounded by his family. Ray was born on October 13, 1932, to Robert “Tobe” and Signe (Carlson) Reed at home in Monroe County, Iowa. To this union, four children were born; Robert, Raymond, David, and Nellie. When Signe passed away in 1938, Tobe married Elsie Carlson and they had three children; Ronald, Terry, and Randy. Ray grew up and attended Albia High School graduating with the class of 1951. Following high school, Ray worked for Iowa Road Builders before going to serve his country in the United States Army from 1953 until he was honorably discharged in 1955. Upon returning home, Ray worked various construction jobs. He then was the supervisor at the Standard Gas Station in Albia. Ray loved construction work so it was fitting for him to return to it by working at the Monroe County Highway Department driving a truck and then leaving to work at Albia Construction, which later became Reed Construction. Ray retired from Reed Construction in 2010. After retirement, Ray could not be kept away from his love for construction for long because he continued to work by helping with snow removal and running the skid loader for Reed Excavation. Ray was a member of the First Christian Church in Albia, a 50 year member of the American Legion, a charter member of the Eagles Club where he served multiple terms as President, and the Southern Iowa Vintage Tractor Club. He enjoyed being outdoors, collecting vintage tractors (his favorite being his 1939 Farmall B), attending vintage tractor shows, rides, and parades, collecting musical Santas, playing cards with his brothers and grandchildren, and going to the casino to play the slot machines. Ray’s true joy in life was spending time with his family, especially his grandchildren. Ray is survived by his wife of 62 years Pat; 4 children, Jim (Rhonda) Reed of Des Moines, Jeany (Don) Marlin of Albia, Roger (Sandra) Reed of Albia, and Velma (Gene) Furlin of Newton; 14 grandchildren, Scott (Ronda) Reed, Amy (J.P.) Channels, Tony (Cat) Furlin, Eric (Hettie) Lahart, Troy Furlin, Craig (Kerra) Lahart, Kelly (Ariel) Reed, Tara (Dan) Sisler, Tyler Furlin, Chad Meinsma, Kerry Reed, Kasey (Lea Kunkel) Reed, Marissa Reed, and Ethan Reed; 20 great-grandchildren; 2 brothers, Terry (Carol) Reed and Randy (Penny) Reed; as well as a sister-in-law, Sharon Reed. Ray is also survived by many nieces, nephews, cousins and good friends. Ray was preceded in death by his parents, Tobe and Signe Reed; his step-mother, Elsie Reed; 3 brothers, Robert Reed, David Reed, and Ronald Reed; as well as a sister, Nellie Osborn; a brother-in-law, Ramon Osborn; a sister-in-law, Jo’an Reed; and a special nephew Jeff Reed. Visitation will be held from 12:00 p.m. - 8:00 p.m. on Sunday, December 20, 2020 at Tharp Funeral Home in Albia with Ray’s family present from 4:00 p.m. until 8:00 p.m. to greet family and friends. Funeral Services will be held at 10:30 a.m., Monday, December 21, 2020 at the First Christian Church in Albia, with Pastor Arlene Johnson and Pastor Lynda Carlson co-officiating. Burial with military honors provided by the American Legion of Albia, Melrose and Lovilia will follow services at Highland Cemetery in Eddyville. Due to the most recent proclamation and enhanced public health measures for the state of Iowa, masks will be mandatory for those in attendance over the age of 2 for both visitation and the funeral service. A memorial has been established to the Welcome Home Soldier Memorial.

The family of Raymond "Ray" Edward Reed created this Life Tributes page to make it easy to share your memories.