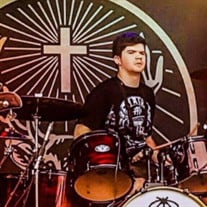 Zachary Allen Bates, age 23, of Albia, IA, went to his Heavenly home on Wednesday, September 11, 2019. Zach was born on December 31, 1995, at the Ottumwa Regional Hospital in Ottumwa, IA, to Tim and Julie (Dicks) Bates. He attended Albia Baptist Temple where he learned about Jesus and His love for him. He accepted Christ at a Backyard Bible Club as a young child. He continued his faith and lived for the Lord throughout his life. He attended school in Albia, graduating with the Class of 2014. Following high school, Zach served his country in the United States Army National Guard. Upon his return home, he worked on the golf course at The Preserve on Rathbun Lake at Honey Creek Resort before going to work in the warehouse at Zero Connect in Albia. Zach loved spending time with his sister and brothers. They would often sit for hours just being goofy, making silly videos, creating characters and playing games. They would put on “shows” for their parents and sometimes the neighbors. Zach loved Grandma & Grandpa’s Friday night suppers with family. Grandma’s chocolate chip cookies were his favorite. They were often his main course. Zach was extremely creative and talented, especially in music and art. He taught himself to play the drums at the age of eight and later taught himself to play the piano and guitar. In high school, he played soccer and was on the drumline and loved marching band. Later, he joined his band, Ashes Armada, which has played at Rock Fest in Kansas City, as well as at numerous venues in Iowa. Zach recorded more than 1,000 songs and posted many of them on Sound Cloud. He was adventurous, enjoyed being outdoors, and loved animals, especially his dog, Aries. Zach was a hard worker who was very compassionate, had a huge heart, and was willing to help anyone in need. Above all, he loved his family, especially his grandma, grandpa, parents, siblings and nieces and nephews. Zach is survived by his parents, Tim and Julie Bates; his grandparents, John and Cheri Dicks and Cheryl Swift; 3 siblings, Jacob (Savannah Jamieson), Jacquelyn and Noah Bates; his nieces and nephews, Eli Cooper, Addelyn Mae, Melody Belle, and Jack Allen; an aunt, Selina (Roy) Henderson and an uncle Tim (Sarah) Dicks; and his cousins, Christopher Henderson, Amanda (Lane) Timmerman, Camden, and Gracie Mae. This, in addition to many other aunts, uncles, cousins, and friends. He was preceded in death by his great grandparents, Cecil and LaVilla Bates, Anna Mae Shroyer, and Howard and Norma Dicks. Visitation will be held from 2:00 p.m-8:00 p.m. on Monday, September 16, 2019, at the Tharp Funeral Home in Albia, with Zach’s family present throughout to greet family and friends. Funeral services will be held at 10:30 a.m., Tuesday, September 17, 2019, at the Trinity United Methodist Church in Albia, with Jason Summers officiating. Burial with military rites provided by the American Legion of Albia, Melrose and Lovilia will follow services at Oak View Cemetery in Albia. In lieu of flowers, a memorial has been established to the family.

Zachary Allen Bates, age 23, of Albia, IA, went to his Heavenly home on Wednesday, September 11, 2019. Zach was born on December 31, 1995, at the Ottumwa Regional Hospital in Ottumwa, IA, to Tim and Julie (Dicks) Bates. He attended... View Obituary & Service Information

The family of Zachary Allen Bates created this Life Tributes page to make it easy to share your memories.

Send flowers to the Bates family.