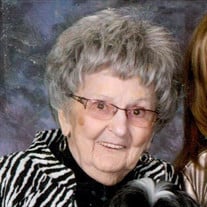 Wilma “BoBo” JoAnn Gutcher, age, 85 of Oskaloosa, passed away Sunday, August 20, 2017, at Mahaska Health Partnership in Oskaloosa. Wilma was born October 26, 1931, to Dave and Minnie (Story) Sandeen on the family farm in Monroe County. She grew up and attended school in Albia, graduating from the Albia High School with the class of 1949. Wilma married William Gutcher on November 14, 1951, at home on the family farm. To this union, 2 children were born, Ed and Debbie. Wilma and William shared 43 years of marriage prior to his passing on January 17, 1995. Wilma was a homemaker and sold Avon. She also worked for an eye doctor in Albia. She was a member of the Sweet Adelines and of the Cow Bells, which is a branch of the Cattlemen’s Association. She was also a 4-H Leader. Wilma won Queen of Tops (a weight loss program) which she was able to travel to Canada for. She was also named the Queen of Breast Cancer for which she was able to travel to Washington DC. Besides her many activities and accomplishments, family always came first for Wilma. She took care of her husband in his last days and has taken care of many family members over the years. Her true joy in life was spending time with her family and friends, who gave her the nickname “BoBo.” Wilma is survived by 2 children, Ed Gutcher of Albia and Debbie Stephan of Oskaloosa; a sister, Roberta Kiene of Republic, Missouri; 3 nieces, Betty Briener, Sandy Kosman, and Cheryl Hartje; 3 great-nephews, Cary (Danette) Kosman, Josh Gutcher, and Roger Stewart; and 2 great nieces, Stephanie Gutcher and Miranda Kosman. Wilma was preceded in death by her husband, William; her parents, Dave and Minnie; a sister, Betty Briener; a nephew, Gary Gutcher; a niece, Linda Briener; and a great nephew, Chris Kosman. Funeral services will be held at 10:30 a.m., Wednesday, August 23, 2017, at Tharp Funeral Home in Albia, with Pastor Richard Grimes officiating. Burial will follow the service at Oak View Cemetery in Albia. Visitation will begin at l2:00 p.m. until 8:00 p.m., Tuesday, August 22, 2017, at Tharp Funeral Home in Albia, with Wilma’s family present from 5:00 p.m. until 8:00 p.m. Tuesday evening to greet family and friends. In lieu of flowers, the family has established a memorial to the American Breast Cancer Society.

The family of Wilma JoAnn Gutcher created this Life Tributes page to make it easy to share your memories.

Send flowers to the Gutcher family.