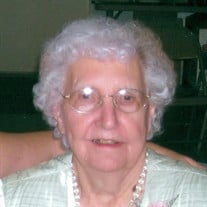 Wilma Etcher, age 91, of Lovilia, passed away on September 18, 2016, at Vista Woods Care Center in Ottumwa. Wilma was born on May 4, 1925 in Ottumwa to Arthur and Abbie (Goff) Peterson. She grew up and attended Eddyville High School and graduated with the Class of 1942. On March 7, 1943 she was united in marriage to Albert Guy Etcher. To this union 6 children were born, Don, Dale, Jerilyn, Mary, Carol, and Jean. They shared 57 years of marriage together until Albert’s passing on March 3, 2000. Wilma was a homemaker for most of her life and enjoyed taking care of others. She was a member of the Independent Bible Church in Bussey and would help with the Ladies Aid Group. She was a gifted seamstress and quilter and made over 300 quilts, 150 dresses for Africa and in one winter she crocheted over 50 afghans. She enjoyed reading, scrap booking, and cherished her photo collection of her children and grandchildren. Her real joy in life was spending time with her friends and family. She is survived by her 6 children, Don (Barbara) Etcher of Lovilia, Dale (Jeanne) Etcher of Indianola, Jerilyn Hall of Ottumwa, Mary (Don) Hines of Montezuma, Carol (Ray) Ryon of Ottumwa, and Jean (Tim) Mercer of Fairfield; 25 grandchildren; 52 great grandchildren and 19 great-great grandchildren. She is preceded in death by her husband, Albert; a grandson, Jeff Ballard; a brother, Maurice Peterson and 2 son-in-laws, Kenny Chidester and Tom Hall. A visitation will be held at the Tharp Funeral Home on Tuesday, September 20, 2016 from 1:00 p.m.- 8:00 p.m. with Wilma’s family present from 6:00 p.m. – 8:00 p.m. Funeral services will be held at 10:30 a.m., Wednesday, September 21, 2016 at the Independent Bible Church in Bussey, with Pastor Andy Tuttle officiating. Burial will follow service at Woodlawn Cemetery in Lovilia. In lieu of flowers memorials may be made to the Independent Bible Church or the Christiansburg United Methodist Church. Condolences may be left for the family at www.tharpfh.com.

Wilma Etcher, age 91, of Lovilia, passed away on September 18, 2016, at Vista Woods Care Center in Ottumwa. Wilma was born on May 4, 1925 in Ottumwa to Arthur and Abbie (Goff) Peterson. She grew up and attended Eddyville High School... View Obituary & Service Information

The family of Wilma Etcher created this Life Tributes page to make it easy to share your memories.

Send flowers to the Etcher family.