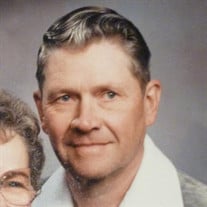 Bill Henderson quietly left us the evening of July 8, 2016, at the age 87. Bill was born February 24, 1929, to James “Floyd” and Ethel (Carlson) Henderson on the family farm near Lovilia. He attended country school and later graduated from Albia High School with the class of 1947. On March 20, 1949, he was united in marriage to Nancy Lowenberg at the Methodist Church in Albia. To this union 3 children were born, Linda, Bob, and Virginia. Bill worked at John Morrell Co. in his younger years. He loved farming and farmed his whole life, artificially inseminating cattle for 10 years. He later worked as an aide at the VA hospital in Knoxville for several years before his retirement. He was a member of the Trinity United Methodist Church in Albia and the American Legion 1-2 Club. In his earlier years, he was a member of the Albia Jaycees through which he helped string lights at Christmas time on the courthouse. Bill was active, a very hard worker and loved doing things outdoors. He enjoyed camping and loved working on his small farm. He loved the animals, including cows, mules, turkeys, and especially his horses. Bill and his grandchildren rode in parades in his wagon pulled by ponies. During high school, Bill drove a Model A Ford. After high school, he enjoyed riding his Indian motorcycle. When the children were growing up, Bill worked hard to save money for their annual family vacation to Oregon. He and Nancy later traveled south for the winters. Bill enjoyed attending his grandchildren’s different activities and sporting events. He was a talented pool player and enjoyed cribbage and playing cards with family and friends as well. Bill was a quiet, patient, and loving man with a great, dry sense of humor. His real joy in life was spending time with his family and friends. Bill is survived by his wife of 67 years, Nancy Henderson of Albia; his children, Linda Eubanks of Owensville, MO, Bob (Jean) Henderson of Albia, and Virginia Henderson-Smead of Hiteman; 5 grandchildren, Justine and Adam Eubanks, Aaron (Cassie) Henderson, Nicole (Cody) Myers, and William Smead; and 6 great grandchildren, Bradley Sexton, Wesley Eubanks, Matthew McMahan, Kinsley and Presley Henderson, and Gunner Myers. Bill is also survived by a sister, Mary Scott; a brother, Don Henderson; and several nieces, nephews, and cousins. He was preceded in death by his parents, Floyd and Ethel Henderson; 2 sisters, Ruth Dunkin and Mildred Buckrop; and a son-in-law, Roy Smead. Funeral Services will be held at 10:30 a.m., Wednesday, July 13, 2016, at Trinity United Methodist Church in Albia, with Pastor Neil Montz officiating. Burial will follow services at Union Chapel Cemetery in Albia. Visitation will be held from 1:00 p.m. to 8:00 p.m. Tuesday, July 12, 2016, at Tharp Funeral Home in Albia, with Bill’s family present from 5:00 to 8:00 p.m. Memorials have been established to HCI Hospice or the American Legion.

Bill Henderson quietly left us the evening of July 8, 2016, at the age 87. Bill was born February 24, 1929, to James &#8220;Floyd&#8221; and Ethel (Carlson) Henderson on the family farm near Lovilia. He attended country school and later graduated... View Obituary & Service Information

The family of William "Bill" Henderson created this Life Tributes page to make it easy to share your memories.

Send flowers to the Henderson family.