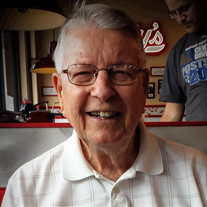 William (Bill) L. Fitzgerald, age 90, of Overland Park, Kansas formerly of Melrose, passed away on Friday, April 28, 2017 at Santa Marta Retirement Community in Overland Park, Kansas. He was born on May 22, 1926 to William H. and Dana (Hilliard) Fitzgerald in Des Moines, Iowa. He grew up in Des Moines and spent his summers in Melrose, Iowa. In 1943 he enlisted in the United States Navy at the age of 17 and served his country during WWII and had been stationed on a ship in the South Pacific Ocean. After serving six years in the military, he returned to Iowa. Bill met the love of his life Mary Lou Curran on Thanksgiving night at Leo’s Social Club in Melrose. They were married on January 10, 1951 at St. Patrick’s Church in Melrose. To this union 4 children were born, Terry, Danny, Debbie and Cindy. Bill and Mary Lou shared 59 years of marriage together until her passing in 2010. Bill traveled around the world after retirement with Mary Lou. They toured Europe and other foreign countries. He was an avid golfer and would be on the course as often as he could. His real joy in life was spending time with his family and friends. Bill is survived by his four children, Terry (Tee) Fitzgerald, Danny (Rachal) Fitzgerald, Debbie Fitzgerald and Cindy (Mark Hebenstriet). He is also survived by his three grandchildren, Mollie Fitzgerald, Will Fitzgerald and Jake Sultani He is preceded in death by his parents, William H. and Dana Fitzgerald and his wife, Mary Lou Fitzgerald. A Mass of Christian Burial will be held at 11:00 a.m., Tuesday, May 2, 2017 at St. Patrick’s Catholic Church in Melrose, with Father Mark Yates C.PP.S. officiating. Burial with military rites provided by the American Legion of Albia, Melrose and Lovilia will follow at Mount Calvary Cemetery south of Melrose. Visitation will be held from 6:00 p.m.-8:00 p.m., Monday, May 1, 2017 at St. Patrick's Catholic Church in Melrose with Bill’s family present from 6:00 p.m.-8:00 p.m., to greet family and friends. A 6:30 rosary will be led by St. Patrick’s Altar and Rosary Society and a wake service will be held at 7:00 p.m. A memorial has been established to the Alzheimer’s Association.

William (Bill) L. Fitzgerald, age 90, of Overland Park, Kansas formerly of Melrose, passed away on Friday, April 28, 2017 at Santa Marta Retirement Community in Overland Park, Kansas. He was born on May 22, 1926 to William H. and Dana... View Obituary & Service Information

The family of William Lewis Fitzgerald created this Life Tributes page to make it easy to share your memories.

Send flowers to the Fitzgerald family.