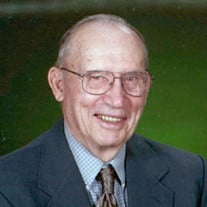 William “Bill” Charles Trinkle, age 92, of Albia, passed away on Wednesday, January 27, 2021, at the Monroe County Hospital in Albia, under the care of EveryStep Hospice. Bill was born at home in Marysville, Iowa on November 5, 1928 to Cecil and Lois (Neifert) Trinkle. He attended and graduated from Bussey High School. On May 31, 1953, he married Ila Mae Nall and to this union, three children were born, Jeff, Brian, and Linda. Bill and Ila Mae shared 67 years of marriage until her passing on July 7, 2020. Bill served his country as a soldier in the United States Army stationed in Germany during the Korean War. In his younger years, he was a 4-H leader, the sheep superintendent with the Monroe County Fair, a Troy Township Trustee, and he assisted the ASCS office in Albia measuring grain bins and fences. He also worked at the Albia Post Office and clerked auctions for Louis Khristoff and Greg Morehead. Bill loved to farm, raise ponies and formed a pony team that they would take to parades. He and Ila Mae had a very close neighborhood family. They would get together to have parties and enjoy homemade ice cream. Bill also enjoyed going to girls basketball games. He was a member of Trinity United Methodist Church in Albia and served on Union Chapel Cemetery Board. Bill enjoyed being outdoors and farming. He enjoyed traveling to many different areas for flea markets and toy shows, where he and Ila Mae often sold collectible toy tractors and Barbie dolls. Above all, he enjoyed spending time with his family and friends, especially his grandchildren. Bill is survived by three children, Jeff (Julie) Trinkle, Brian Trinkle and Linda Trinkle and significant other, Kelly Pinegar; four grandchildren, Jessica (Jeff) Caudill, Joe (Natalie) Trinkle, Heather Perry and Heidi Perry; four great-grandchildren, Jade, Janelle, Jett, and Kohl; two sisters, Betty Auspberger and Barbara (Tom) Amsberry. He is also survived by many nieces, nephews, cousins, and many good friends. He was preceded in death by his wife Ila Mae; his parents, Cecil and Lois; a brother Paul Trinkle; and 2 grandchildren in infancy. No visitation is planned and a private family funeral service will take place with Pastor Roger Henry officiating. Burial will be in Union Chapel Cemetery in Albia. Bill’s funeral service will be able to be viewed on the Tharp Funeral Home Facebook page and our YouTube channel. A memorial has been established to Union Chapel Cemetery.

William &#8220;Bill&#8221; Charles Trinkle, age 92, of Albia, passed away on Wednesday, January 27, 2021, at the Monroe County Hospital in Albia, under the care of EveryStep Hospice. Bill was born at home in Marysville, Iowa on November 5,... View Obituary & Service Information

The family of William "Bill" Charles Trinkle created this Life Tributes page to make it easy to share your memories.

Send flowers to the Trinkle family.