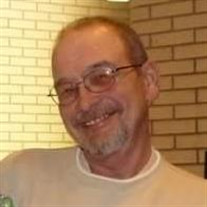 William “Bill” Michael Popson, age 66, of Albia, passed away on Friday, April 20, 2018, at the Oskaloosa Care Center in Oskaloosa, Iowa. Bill was born on March 30, 1952, to John and Irene Popson in Albia, Iowa. He grew up and attended the Albia High School graduating with the Class of 1970. In 1972, he was united in marriage to Marilyn Flattery at St. Patrick’s Catholic Church in Georgetown and to this union, 2 children were born, Jason and Stephanie. Bill and Marilyn later divorced. Bill married Maggie Gardner in 1987 in Albia and to this union, a son Kyle was born. Bill and Maggie later divorced. Bill worked at Chamberlains in Albia before taking a job at Clow Valve Company in Oskaloosa. He then went to work for Hormel in Ottumwa and later at Maytag in Newton from which he retired in 2007. He enjoyed being outdoors and working on trucks, cars, and tractors. He enjoyed reading westerns, especially the Louis L’Amour series, and watching Nascar. Above all, Bill loved spending time with his family and friends. Bill is survived by his children, Jason (Joey) Popson of Albia, Stephanie (Brody) Kosman-Baker of Albia, and Kyle Popson of Albia; 9 grandchildren, Kayle, Cody, Peyton, Kole, Casen, Paige, Bella, Cooper, and Conner; and his siblings, John (Martha) Popson, Helen McDowell, Kathryn (Matt) Cernic, Bob Popson, Jeanne (Steve Miller) Popson, and Joyce (Terry) Shaw. Bill is also survived by many nieces, nephews, cousins and good friends. He was preceded in death by his parents, John and Irene; a sister, Shirley Playle; a son-in-law, Chris Kosman; and a grandson, John Michael Popson. A Mass of Christian Burial will be held at 10:30 a.m., Thursday, April 26, 2018, at St. Mary’s Catholic Church in Albia, with Father Michael E. Volkmer C.PP.S. officiating. Burial will follow services at St. Mary’s Cemetery in Weller. Visitation will be held from 1:00 p.m.-8:00 p.m. Wednesday, April 25, 2018, at the Tharp Funeral Home in Albia, with Bill's family present from 4:00 p.m.-8:00 p.m. to greet family and friends. A 4:00 p.m. rosary will be led by St. Mary’s Altar and Rosary Society and a Christian Wake Service will be held at 6:30 p.m. An open memorial has been established to be determined at a later date.

The family of William "Bill" Michael Popson created this Life Tributes page to make it easy to share your memories.

Send flowers to the Popson family.