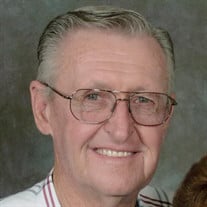 Wiley Hutchinson, age 82, of Lovilia, passed away peacefully on Saturday, June 3, 2017, at the Hospice house in Ottumwa under the care of Hospice of Davis and Wapello County. Wiley was born on March 14, 1935, to Lloyd and Mabel (Davis) Hutchinson at his home in rural Mahaska County. He grew up and attended the Lovilia High School graduating with the Class of 1954. On October 30, 1954 he was united in marriage to Ruth Elizabeth Detar. To this union two children were born, David and Debra. Wiley and Ruth shared 62 years of marriage together until her passing on February 16, 2017. Wiley was a farmer his entire life. He was also a very talented and well known square dance caller for which he received many awards, including being inducted in the Rio Grande Valley Walk of Fame in 2005 and the “Caller-Cuer Hall Of Fame Award” in 2011. Wiley also traveled with Ruth as they planned, arranged and hosted square dancing events in the Midwest from Iowa to Texas. They spent winters down in Texas for over 30 years and Wiley helped start the Border Fest Square Dancing Event in Mexico and hosted it for over 20 years. He enjoyed driving semi-trucks part time and traveling over the country, playing sports in his younger years and attending his grandchildren’s sporting events. His real joy in life was spending time with his family and friends. Wiley is survived by his children, David (Melinda) Hutchinson of Lovilia and Debra (Cory) House of Ottumwa; nine grandchildren, Dustin (Karrie) Hutchinson, Ken Hutchinson, Jess (Alana) Hutchinson, Austin Hutchinson (Sarah Kahler) , Tyler Crall (Jessica Brady), Josie (Brock) Davis, Cody House, Kaylee House and Makenna House; 6 great grandchildren and a brother, Donnie (Beverly) Hutchinson. Wiley is also survived by several nieces, nephews, cousins and good friends. He was preceded in death by his wife, Ruth Hutchinson and his parents, Lloyd and Mabel Hutchinson. Funeral services will be held at 10:30 a.m., Tuesday, June 6, 2017, at the Tharp Funeral Home in Albia, with Pastor Roger Henry officiating. Burial will follow the service at Woodlawn Cemetery in Lovilia. Visitation will be held from 3:00 p.m.- 8:00 p.m. Monday, June 5, 2017, at the Tharp Funeral Home in Albia, with Wiley’s family present to greet friends and family from 5:00 p.m.-8:00 p.m. A memorial has been established to Hospice of Davis and Wapello County.

Wiley Hutchinson, age 82, of Lovilia, passed away peacefully on Saturday, June 3, 2017, at the Hospice house in Ottumwa under the care of Hospice of Davis and Wapello County. Wiley was born on March 14, 1935, to Lloyd and Mabel (Davis)... View Obituary & Service Information

The family of Wiley Hutchinson created this Life Tributes page to make it easy to share your memories.

Send flowers to the Hutchinson family.