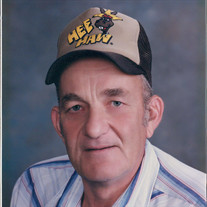 Wendell Keeton, age 80, of Albia, passed away on December 21, 2016 at his home surrounded by his family. Wendell was born on June 18, 1936 at home in rural Monroe County to Marion and Enid (Murdy) Keeton. He grew up and attended country schools until eventually enrolling at the Lovilia High School. On January 22, 1956 he was united in marriage to Claudean Tarbell at the Nazarene Church in Albia. To this union three children were born, Carl, Gordon, and Roxann. Together, Wendell and Claudean spent 60 years of marriage together. Wendell was employed at Maytag for 12 years before taking a job at John Deere Ottumwa Works where he retired after 28 years. Wendell also owned his own saddle shop where he sold saddles and tack. He was a member of the Iowa Coon Hunters Association, a member of the Monroe County Saddle Club and was also a lifetime member of the Original Mountain Curs Breeding Association. Wendell enjoyed being outdoors, coon hunting, attending horse sales, country music shows, and raising chickens, donkeys and other exotic animals. His real joy in life was spending time with his family and friends, especially his grandchildren and great grandchildren. He is survived by his wife, Claudean Keeton; his children, Carl (Jackie) Keeton, Gordon (Stacey) Keeton and Roxann (David) Valentine; four grandsons, Nick, Nathan, Nolan (Taylor) Valentine and David (Robin) Keeton; a granddaughter, Amanda (Ross) Small; three great grandchildren, Kayla Valentine, Sydnee Houser, and Ryker Keeton; two sisters, Lora (Bob) Whicker and Janet Watt; a brother, Tom Keeton and several nieces and nephews. Wendell is preceded in death by his parents, Marion and Enid and a grandson, Dustin Keeton. Funeral Services will be held at 10:30 a.m., Tuesday, December 27, 2016, at the Tharp Funeral Home in Albia. Burial will follow services at Union Chapel Cemetery. Visitation will be held from 2:00 p.m. to 6:00 p.m. Monday, December 26, 2016, at Tharp Funeral Home in Albia, with Wendell’s family present throughout the day and evening to greet friends and family. Memorials have been established to the Blakesburg Christian Church or the American Kidney Society.

Wendell Keeton, age 80, of Albia, passed away on December 21, 2016 at his home surrounded by his family. Wendell was born on June 18, 1936 at home in rural Monroe County to Marion and Enid (Murdy) Keeton. He grew up and attended country... View Obituary & Service Information

The family of Wendell Keeton created this Life Tributes page to make it easy to share your memories.

Send flowers to the Keeton family.