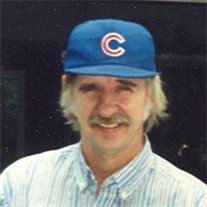 Wayne Edward Johnson, age 58, of Ottumwa, Iowa formerly of Albia, Iowa died Wednesday, July 26, 2006 at his residence in Ottumwa. He was born October 1, 1947 in Iowa City, Iowa to Harry "Peach" and Beverly (Remmark) Johnson. Wayne was a graduate of Albia High School, class of 1966. He was a veteran of the Vietnam War serving in the U.S. Army. He had worked at Chamberlain Manufacturing in Albia, the Glen-Gery Brick of Ottumwa, and recently was employed at Clow-Valve Company in Oskaloosa, Iowa. He enjoyed all kinds of sports including Major League Baseball and NFL football. He was a former coach of Little League Baseball and had played in Men's Softball Leagues in Albia. Wayne enjoyed spending time with his family and friends. He is survived by his mother, Beverly Lee of Albia; one brother Ben (Deb) Johnson of Albia; one step-sister, Paula Stevens of Des Moines, Iowa; nieces and nephews: Mindy, Michelle, and Brandon Johnson, and Jill West. Wayne was preceded in death by his father, Harry "Peach" Johnson; two sons, Michael and Shawn Johnson; one brother, Steve Johnson and a sister in infancy. Funeral services will be held at 10:30 A.M. Saturday, July 29, 2006 at the Winfield Funeral Home in Albia. Burial with Military Rites will be held at Woodlawn Cemetery in Lovilia. Visitation will open after 4:00 P.M. Friday, July 28, 2006 at the Winfield Funeral Home in Albia with the family present from 6-8 P.M. Friday evening. Casketbearers will be Kenny Chance, Edward "Shorty" Thomas, Jim Reed, Phil and Vince Remmark, and Miles Brummel. Memorials have been established to the Monroe County Little League

The family of Wayne Edward Johnson created this Life Tributes page to make it easy to share your memories.

Send flowers to the Johnson family.