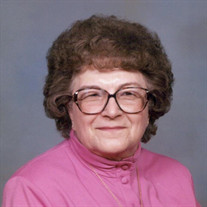 Wanda Mae Steinbach, age 89, of Albia, passed away on Tuesday, December 15, 2020, at the Monroe Care Center in Albia, Iowa. Wanda was born on February 15, 1931, to Raymond and Irma “Merle” (Stewart) Tucker at home in Lovilia, Iowa. She graduated from Albia High School with the class of 1949. Wanda married Edward Steinbach on her birthday in 1953. All of their married life, they resided in Albia, They had one son, Michael William. Wanda worked as a legal secretary for two different law firms in Albia for several years, and also was the bookkeeper for Richey Florist, her husband’s business. Following that, she was secretary at Woodcock Insurance. In her later years, she was a greeting card merchandiser, delivered the local newspapers, cleaned houses, and was a night caretaker for the elderly. Her strong faith led to her to be involved in many activities at the Trinity United Methodist Church in Albia, including UMW and bell choir. She was also an active member of the Legion Auxiliary, the Hospital Auxiliary, Canasta Club, and played the music for the Dancing Grannies’ performances. Wanda was quite proud of her grandchildren and family was very important to her. Wanda is survived by her son Michael, daughter-in-law, Connie and grandchildren, Adam Steinbach and Emily Steinbach. She is also survived by many nieces, nephews, and cousins. Wanda was preceded in death by her parents, husband, a brother Harold, and a sister-in-law Geneva. A memorial service will be held at 11:00 a.m. on Saturday, July 24, 2021, at the Trinity United Methodist Church in Albia, with Pastor Roger Henry officiating. In lieu of flowers, the family requests memorials to the Trinity United Methodist Church.

The family of Wanda Mae Steinbach created this Life Tributes page to make it easy to share your memories.

Wanda Mae Steinbach, age 89, of Albia, passed away on Tuesday,...

Send flowers to the Steinbach family.