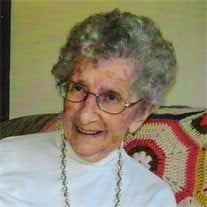 Wanda Virginia Murdy, age 89, of Albia, Iowa died Friday, April 13, 2007 at Benton Place Apartments in Albia. She was born September 1, 1917 in Monroe County, Iowa to, Ben and Louisa (McCoy) Jones. She married Wendell "Buzz" Murdy on May 19, 1940 in Monroe County. He passed away September 11, 2002. She was a graduate of Moravia High School, class of 1934. She was a country schoolteacher for five years at Hilton and Blue Schools. After marriage she was a homemaker and also a substitute teacher in the Moravia school district for twenty years. She was a member of the First Christian Church in Albia and was involved with many activities within the church. She was also involved with the Monroe County Hospital Auxiliary. She is survived by three sons; John (Burnaye) Murdy of Agency, IA., David (Barbara) Murdy of Derby, CT., and James (Elaine) Murdy of Marion, OH; ten grandchildren, and 11 great grandchildren. One brother Lyle Jones of Mentor, OH also survives Wanda She is preceded in death by her parents; husband, and one brother, Rev. Donald Jones. Funeral services will be held at 10:30 A.M. Tuesday, April 17, 2007 at the First Christian Church in Albia with Rev. Lynda Carlson officiating. Burial will be held in Hillcrest Cemetery in Moravia. Visitation will open after 11:00 A.M. Monday, April 16, 2007 at the Winfield Funeral Home in Albia with the family present from 6-8 P.M. Monday evening. In Lieu of Flowers, Memorials may go to the First Christian Church in Albia.

The family of Wanda Virginia Murdy created this Life Tributes page to make it easy to share your memories.

Send flowers to the Murdy family.