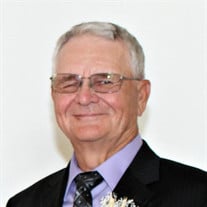 Walter “Junior” Ellsworth Gardner, age 76, of Albia, passed away on Monday, September 3, 2018, at Mercy Medical Center in Des Moines, surrounded by his loved ones. He was born on February 27, 1942, to Walter Sr. and Mildred (Stewart) Gardner on the family farm in Bluff Creek Township. He grew up and graduated from the Albia High School with the Class of 1960, where he was a member of the National Honor Society. On April 12, 1964, he was united in marriage to Shirley Koger at the United Brethren Church in Albia. To this union, 3 children were born, Debi, Jeff, and Angie. Junior was a grain and livestock farmer all of his life. He worked as a crop insurance adjuster and later became a sales agent selling crop insurance until present time. He was a past member of the United Brethren Church and a current member of the Trinity United Methodist Church in Albia where he played an active role on several committees. He was a true man of God which was evidenced in the way that he treated his wife, children, and friends. He was also on the FHA Board, county committees, and was a 4-H leader. In 2014, he was inducted into the Farm Bureau Hall of Fame. Junior enjoyed being outdoors, hunting, gardening, and playing horseshoes. He also liked playing card games, such as pitch and cribbage, and playing snooker. Junior and Shirley enjoyed dancing and were known for the “Jitterbug”. They loved to travel together and have been to numerous places, including Australia, Alaska, and Hawaii. While traveling, Junior always carried his camera and enjoyed taking photographs of the sites. He was an avid Hawkeye fan and enjoyed watching football and basketball games. He was extremely talented in making barbed wire sculptures of all sorts, including life size sculptures of a deer, a bear, and an eagle. There was nearly nothing that he could not construct out of barbed wire. He took pride in making barbed wire crosses and enjoyed sharing them with anyone he felt could use a lift in spirits. He never knew a stranger, loved visiting with others and truly took an active interest in others. Above all else, he delighted in spending time with his family and friends, especially his grandchildren. Among his many other talents, he played the guitar and often sang “You Are My Sunshine” to his wife and children. Junior is survived by his wife of 54 years, Shirley, his children, Debi (Ronnie) Delaney of Albia, Jeff (Lynn) Gardner of Altoona, and Angie (Darryl) Bresson of Ankeny; 11 grandchildren, Nick (Kalei) Douglas, Eric (Danielle) Douglas, Taylor (Nick) Scott, Brody and Tannor Gardner, Hannah, Claudia, Jack, and Emma Bresson, and AbbyGale and Ronnie Delaney Jr.; 7 great grandchildren, Chase Douglas and Piper Douglas, Willow and Sage Scott, Lila Slayton, Kiba Hemphill, and James Delaney; a brother, Ray (Pat Hoelzel) Gardner; and a sister, Dalene Bateman. He is also survived by many nieces, nephews, cousins, and good friends. He is preceded in death by his parents, Walter and Mildred and a brother, Clyde Gardner. Visitation will be held from 3:00 p.m. to 8:00 p.m. Monday, September 10, 2018, at Tharp Funeral Home in Albia, with Junior’s family present throughout to greet family and friends. Funeral services will be held at 10:30 a.m., Tuesday, September 11, 2018, at the Trinity United Methodist Church in Albia with Pastor Roger Henry officiating. A private family burial will take place at Selection Cemetery in Albia. A memorial has been established to the Welcome Home Soldier Memorial.

The family of Walter "Junior" Ellsworth Gardner created this Life Tributes page to make it easy to share your memories.

Send flowers to the Gardner family.