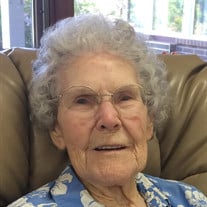 Virginia Lucile (Amoss) Overturf, age 94, of Albia, passed away Saturday, November 26, 2016, at Monroe Care Center in Albia. Lucile was born on August 12, 1922, to Freeman and Etta (Cooper) Johnson, in Clarke County, Iowa. She attended the Moravia High School, graduating with the Class of 1942. She was united in marriage to Lawrence Clyde Amoss on April 12, 1942, in Unionville, Missouri. They shared 51 years of marriage prior to Lawrence’s passing on December 17, 1993. Lucile later married Edwin Overturf on August 14, 1999 in Sigourney, Iowa. Ed passed away on June 30, 2014. Lucile worked for the Albia Community Schools in the cafeteria for 23 years. She was a member of the Trinity United Methodist Church in Albia. She enjoyed gardening and needle point. Lucile is survived by her two daughters, Catherine Burkman of Albia, and Carol (David) Quijano of Des Moines; 2 stepsons, Tony (Cheryl) Overturf of Ottumwa and Jim (Tami) Overturf Oskaloosa; 4 grandchildren; 5 great-grandchildren and many step-grandchildren and step-great-grandchildren. She is also survived by 2 brothers, Robert Dean Johnson of Mission, Texas and Kenneth Freeman Johnson of Torrington, Wyoming. She was preceded in death by her parents, Freeman and Etta; her husbands, Lawrence Amoss and Edwin Overturf; a son, Larry Dean; a son-in-law Richard Burkman; a great-grandson, Matthew; 3 brothers, Guy, Dwight “Pete” and Ike Johnson; and one sister, Helen Querry. Funeral Services will be held at 11:00 a.m., Monday, November 28, 2016, at the Trinity United Methodist Church in Albia, with Pastor Richard Grimes officiating. A private family burial will follow services at St. Mary’s Catholic Cemetery in Albia. Visitation will be held from 1:00 p.m. to 8:00 p.m. Sunday, November 27, 2016, at Tharp Funeral Home in Albia, with Lucile’s family present from 6:00 p.m. to 8:00 p.m. to greet friends and family. Memorials have been established to the Trinity United Methodist Church in Albia.

The family of Virginia Lucile (Amoss) Overturf created this Life Tributes page to make it easy to share your memories.

Send flowers to the Overturf family.