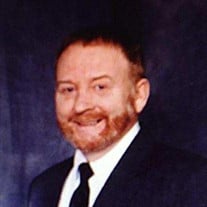 Victor Charles Butz, age 75, of Moravia, passed away on Monday, October 8, 2018, at the Monroe County Hospital in Albia surrounded by his family. Victor was born on April 12, 1943, in Cedar Rapids, Iowa, to Vincent and Hilda (Schulte) Butz. He graduated from the Norway Community High School with the Class of 1961. After graduating from high school, Victor served his country in the United States Army during Vietnam. On June 27, 1967 Victor was united in marriage to Patricia Driscoll in Watkins, Iowa. To this union 4 children were born Shelly, Danny, Tammy and Jerry. They shared 46 years of marriage before Patricia’s passing on July 21, 2013. Victor enjoyed staying busy and loved to farm. He loved to drive around the countryside. There was not a gravel road that he did not know in Southern Iowa. One of his greatest joy was spending time with his family and friends. Victor is survived by his children, Shelly (Paul) Robinson; Tammy (Jess) Uhlenhake and Jerry Butz; 7 grandchildren, Heather (Nick) Main, Chase and Adam Uhlenhake, Colton, Cody and Cason Butz and Emily (Jody Ballanger) Robinson, his siblings, Robert Butz, Norma Jean Black, Geneo Paulson, Juney Butz, and Glenda Mae Threet. Victor is also survived by serval nieces, nephews, cousins and good friends. He is preceded in death by his wife, Patricia; parents, Vincent and Hilda; a son, Danny; siblings, Ilene, Orville, Dennis and Wayne. Visitation will be held from 2:00 p.m. until 5:00 p.m. on Saturday, October 13, 2018, at the Moravia Methodist Fellowship Hall in Moravia with a celebration of life service at 2:30 p.m. A light lunch to follow. Victor’s family will be present throughout to greet family and friends. An open memorial has been established to the family.

Victor Charles Butz, age 75, of Moravia, passed away on Monday, October 8, 2018, at the Monroe County Hospital in Albia surrounded by his family. Victor was born on April 12, 1943, in Cedar Rapids, Iowa, to Vincent and Hilda (Schulte)... View Obituary & Service Information

The family of Victor Charles Butz created this Life Tributes page to make it easy to share your memories.

Victor Charles Butz, age 75, of Moravia, passed away on Monday,...

Send flowers to the Butz family.