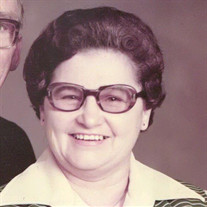 Velma Faye Jones, age 92, of Albia, passed away on Saturday, July 8, 2017, at her home in Albia surrounded by her family. Velma was born a twin on January 27, 1925, in Melrose, Iowa, to David and Lucy (Frasier) McDonough. She married John J. Jones on March 13, 1943, in Weller. To this union six children were born, Johnny, Margaret, Linda, Dorothy, Mary, and Patty. They shared 57 years of marriage prior to his passing in 2000. Velma attended country school while growing up. She later went to school for making and decorating wedding cakes and then to Indian Hills Community College to study horticulture. Velma worked at the Miner’s (Smith) Hospital in Albia and in an ice cream store. She worked at Maloney’s Door Factory and then at Chamberlain’s Manufacturing in Albia for 28 years. When Chamberlain’s closed, she went to work at Delongs in Albia until she retired. Velma was talented in many areas and had lot of interests. She enjoyed quilting, crocheting, ceramics, and making necklaces. She loved to be outdoors and grew big gardens with strawberry and raspberry patches. She liked to dance and above all, enjoyed spending time with her family and friends. Velma is survived by her children, Johnny (Norma) Jones, Linda (Lee) Sample, and Patty Bossard; 8 grandchildren, Matt Jones, Jason Jones, Bobby (Kerrie) Preston, Chandra (Tony) Castaneda, Shelly (Norman) Beach, Chris (Carol) Sample, David Jones, and Mike Pottorff; 13 great-grandchildren; and 9 great-great grandchildren. She is also survived by her sisters, Maye Peiffer and Lucille Kendall; a son-in-law, Bob Preston; and several nieces and nephews. She was preceded in death by her husband, John J. Jones; her parents, David and Lucy McDonough; 3 daughters, Margaret Preston, Dorothy Jones, and Mary Jones; a grandson, William Joseph Beach; 2 brothers, Art and James McDonough; her mother and father-in-law, Bill and Kate Jones; a son-in-law, Steve Bossard; and many brothers and sisters-in-law, aunts, uncles, and cousins. A memorial service will be held at 11:00 a.m., Saturday, July 15, 2017, at Tharp Funeral Home in Albia, with Father Michael E. Volkmer, C.PP.S. officiating. Burial will follow the service at Service Chapel Cemetery in Monroe County. Visitation will be held from 9:00 a.m. - until the time of service on Saturday, July 15, 2017, at the Tharp Funeral Home in Albia, with Velma’s family present throughout to greet friends and family. Memorials has been established to masses at St. Mary’s Catholic Church in Albia or to the family.

Velma Faye Jones, age 92, of Albia, passed away on Saturday, July 8, 2017, at her home in Albia surrounded by her family. Velma was born a twin on January 27, 1925, in Melrose, Iowa, to David and Lucy (Frasier) McDonough. She married John... View Obituary & Service Information

The family of Velma Faye Jones created this Life Tributes page to make it easy to share your memories.

Send flowers to the Jones family.