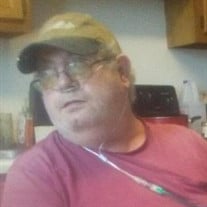 Tony Alan Stump, age 66, of Albia, passed away on Friday, June 14, 2019, at Iowa Methodist Medical Center in Des Moines, Iowa. Tony was born on February 19, 1953, in Ottumwa, IA, to Chester “Ted” and Peggy (Gee) Paulos and was later adopted by George and Halda Stump. He grew up and attended school in Douds and Davis County, graduating from Davis County High School with the class of 1970. He then attended Indian Hills Community College and graduated from the Diesel Mechanics program in 1972. On October 16, 1982, he married Valeda Wynne at the First Christian Church in Ottumwa. Tony and Valeda shared 36 years of marriage prior to his passing. Tony started out as a garbage truck driver Gene Phillips and later became a dump truck operator for Bud Heckart & Sons in Ottumwa, Iowa, where he worked for 26 years. He later drove a semi before retiring. Tony enjoyed being outdoors, farming, hunting, and fishing. He liked trains and classic cars and enjoyed collecting miniatures of both. He was a very hard worker and a very caring and generous person who was willing to help anyone in need. In his younger years, he was known by the local children as the neighborhood bike man as he often fixed or put together bikes for the kids in the basement. Above all, Tony enjoyed spending time with his family, especially his grandchildren. Tony is survived by his wife, Valeda Stump of Albia; his children, Diana McGregor of Moravia, Dana (Jeremy) Summers of Moravia, Molly (Richard) Parks of Albia, Miranda (Brandon) Wickett of Corning, Myra Stump (Kevin Sawyer) of Ottumwa, Makeyna (Efrin) Gonzales of Ottumwa, and Troy Stump of Albia; 19 grandchildren; 7 great grandchildren; 5 siblings, Richard (Paulette) Mitz, Mary (Jim) McGee, Becky (Marvin) Rust, Jim (Cheryl) Paulos, and George (Dorothy) Stump; and a sister-in-law, Trudy Jennings. He is also survived by many aunts, uncles, nieces, nephews, cousins, and good friends. He was preceded in death by his biological parents, Ted and Peggy; his adoptive parents, George and Halda Stump; a son in infancy; and a brother, Jack Jennings. A Celebration of Tony’s life will be held at a later date.

The family of Tony Alan Stump created this Life Tributes page to make it easy to share your memories.

Send flowers to the Stump family.