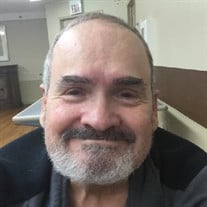 Tom Bills, age 69, of Albia Iowa, passed away at Monroe County Hospital on Saturday, September 25, 2021. Tom was a resident at Oakwood Specialty Care at the time of his passing. He was born on September 8, 1952, to Milliard and Margerat (Seals) Bills. He grew up in the Mystic and Centerville area, going to school in Centerville, Des Moines, and later getting his GED. In April of 1970, he had a son, Michael Bills. On September 10, 1982, he married LaVonne Ocker, and they later divorced. Throughout his years he worked odd jobs, from cleaning to working retail. In his younger years he was the drummer in a band, and could be found in the garage practicing with the band, and playing gigs in bars in the surrounding areas. He had a love for music of all genres, and he often times could be found listening to Snoop Dogg and 2 Pac with his granddaughter Heather. He enjoyed spending time with his granddaughter Nicci, taking her to Walmart so she could get paper and pens, and then she'd go back and spend the night, so she could boss him around. He loved animals, especially dogs. He loved sports and was an umpire for little league in Centerville when his son played ball. He loved to watch football and baseball, and the Hawkeyes and Cubs were his favorite teams. Tom is survived by his granddaughter, Heather (Lee) McDonald, and great grandkids Tyler, Liam & Finn McDonald, his son and grandson, and several cousins and friends. He is preceded in death by his parents, Milliard and Margerat Bill; brothers, Larry and Donald in infancy, and granddaughter, Nicci Caudill A graveside service will be held at 10:00 a.m. on Thursday, September 30, 2021, at Elgin Cemetery in Mystic, IA.

Tom Bills, age 69, of Albia Iowa, passed away at Monroe County Hospital on Saturday, September 25, 2021. Tom was a resident at Oakwood Specialty Care at the time of his passing. He was born on September 8, 1952, to Milliard and Margerat... View Obituary & Service Information

The family of Tom Harold Bills created this Life Tributes page to make it easy to share your memories.

Send flowers to the Bills family.