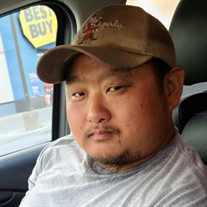 Timothy James “Bobby” Solinger, age 47, of Albia, IA, passed away on Sunday, December 19, 2021, at Iowa Methodist Medical Center in Des Moines. Tim was born on November 24, 1974, in Seoul, Korea and shortly after his birth was adopted by James Solinger and Sondra “Sandy” Johnson. Tim attended schools in Delaware and graduated from high school there. Following school, Tim met the love of his life, Chris Schofield and they moved to Albia in 2005. Tim and Chris have 3 children, Megan, Tyler, and Mollie. Tim was very talented and took a lot of pride in his work. He worked in the maintenance department for the Albia Community School District. He loved his work family, as well as getting to interact with all of the students. He later went to work for Southern Iowa Heating and Cooling doing HVAC and plumbing work. Tim enjoyed being outdoors, hunting, fishing and mushroom hunting. Tim’s family was everything to him and he cherished the time spent with them, especially his children and grandchildren. His grandchildren affectionately called him “Bobby,” and if they were mad at him, they called him “Bob.” He was his children’s biggest fan, attending all of their sporting events, as well as helping coach softball. Tim had a great sense of humor and loved to spend time with his friends as well as play jokes on them. Tim is survived by his wife, Chris; 3 children, Megan (Troy) Ruff, Tyler (Laura) Solinger, and Mollie Solinger; 4 grandchildren, Raina, Patience, Tobias, and Alaina; his father, James (Cynthia) Solinger; his mother, Sandy (Paul) Johnson; 2 siblings, Carrie (Sean) Solinger and Niki (Kenny) Kiess; and his grandfather, Thomas Dennis. Tim is also survived by several nieces, nephews, cousins, and good friends. Tim was preceded in death by his grandparents, Arthur and Francis Solinger and Ann Dennis. Visitation will be held from 4:00 p.m.-8:00 p.m. on Wednesday, December 22, 2021, at the Tharp Funeral Home in Albia, with Tim’s family present throughout to greet family and friends. A memorial service will be held at 10:30 a.m. on Thursday, December 23, 2021, at the Tharp Funeral Home in Albia, with Pastor Roger Henry officiating. Burial will follow services at Woodlawn Cemetery in Lovilia, IA. Tim's family would like to encourage anyone who wishes to please share a memory on this website. An open memorial has been established to the family and will be determined at a later date.

The family of Timothy "Tim" James Solinger created this Life Tributes page to make it easy to share your memories.

Send flowers to the Solinger family.