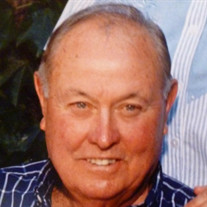 Thomas Junior “Stub” Jamieson, age 92, of Albia passed away on Wednesday, January 4, 2017 at the Monroe Care Center from complications due to Alzheimer’s. Tom was born March 25, 1924 in Hiteman, IA to Thomas and Mae (Evans) Jamieson. He grew up and attended school in Hiteman. On November 30, 1943 he enlisted in the United States Navy serving on the U.S.S. San Jose. On June 17, 1946 he was united in marriage to Helen Boyer. To this union three children were born, Tom, Kay and Gary. Together Tom and Helen shared 70 years of marriage. Tom was a foreman for Cunningham-Reis Construction Company building bridges throughout Iowa for 42 years. After retiring in 1998, Tom and Helen traveled in their motor home out west and to Alaska, spending their winters in Laughlin, NV. He was a member of the American Legion and VFW both of Albia. Tom enjoyed being outdoors hunting, fishing, planting trees, playing softball and baseball in his younger years. He was an avid lifelong Chicago Cubs fan. He particularly enjoyed watching his grandchildren play softball, football and baseball. He helped coach little league baseball when his sons were young. Tom is survived by his wife, Helen; three children, Tom (Kim) Jamieson, Kay Cosgrove (Don Hicklin) of Albia, and Gary (Christie) Jamieson of Hindsville, AK; 13 grandchildren; 13 great-grandchildren; and 2 great-great-grandchildren. Tom is also survived by his two sisters, Kathryn Conway of Melrose and Dorothy (Tom) Spurgin of Albia and many nieces and nephews. He was preceded in death by his parents, Thomas and Mae; three brothers, Marvin (Buzz), Raymond and David John (Red) Jamieson; one granddaughter, Sabra Lynn Jamieson and a son-in-law Craig Cosgrove. Funeral Services will be held at 2:00 p.m. on Monday, January 9, 2017 at the Tharp Funeral Home in Albia, with Pastor Richard Grimes officiating. Burial with military rites provided by the American Legion of Albia, Melrose and Lovilia will follow services at Oak View Cemetery in Albia. Visitation will be held from 12:00 p.m. until service time at 2:00 p.m. on Monday, January 9, 2017 at Tharp Funeral Home in Albia, with Tom’s family present throughout to greet friends and family. Memorials have been established to the Welcome Home Soldier Monument or Care Initiatives Hospice.

The family of Thomas Junior "Stub" Jamieson created this Life Tributes page to make it easy to share your memories.

Thomas Junior “Stub” Jamieson, age 92, of Albia passed away on...

Send flowers to the Jamieson family.