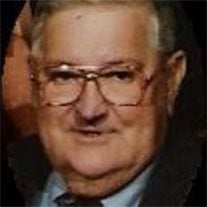 Thomas Gutcher, age 78, of Albia, Iowa died Sunday, October 7, 2007 at the Monroe County Hospital in Albia. Tom was born June 18, 1929, south of Hiteman, Iowa to Fernal and Katherine (Overfield) Gutcher. Tom was a graduate of Albia High School and after school he married Helen June Amoss on February 3, 1951. They shared 54 years of marriage before June's death on August 7, 2005. In 1951 Tom began serving in the U.S. Army, in the 101st Airborne, during the Korean War, from 1951 to 1953. After Tom's service he worked for 25 years with John Morrell, as a meat cutter. Tom later worked for Clow Manufacturing until his retirement in 1980. Tom was a 52 year member of the American Legion, Howard Cessna Post # 136 of Albia. He enjoyed his family, visiting with neighbors and friends, his yard and garden, and watching deer and turkey in his yard, from his home. Tom is survived by his 5 daughters, Linda Gutcher of Albia, Lorraine (Dan) Starcevic of Albia, Kim (Michael) Pasut of Albia, Karen (Kerry) Anderson of North Liberty, and Karla (Lee) Mylenbusch of Knoxville; 13 grandchildren; and 3 great grandchildren. Tom is also survived by one sister-in-law Darlene Amoss of Albia. Tom is preceded by his parents; his wife, June Gutcher; one sister, Eleanor Lane; three brothers, Fernal Gutcher, Jr., William Gutcher, and John Gutcher; and one brother-in-law, Lawrence Amoss. Funeral services will be held at 10:30 A.M., Tuesday, October 9, 2007, at the Winfield Funeral Home in Albia with Rev. Richard Grimes officiating. Burial will follow services at Oak View Cemetery in Albia, with military services provided by the American Legion of Albia. Visitation will be open from 11:00 A.M. to 9:00 P.M., Monday, October 8, at the Winfield Funeral Home in Albia. The family will be present throughout the visitation. Memorials have been established to Hospice of Monroe County or to the wishes of the family.

The family of Thomas Gutcher created this Life Tributes page to make it easy to share your memories.

Send flowers to the Gutcher family.