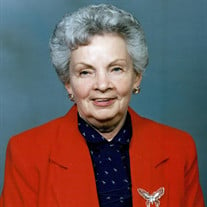 Therese Evelyn (Barrett) Robinson, age 93, of Albia, passed away on Tuesday, April 21, 2020, under the care of EveryStep Hospice at the Monroe County Hospital in Albia. Therese was born on October 6, 1926, in Chicago, IL, to Maurice and Isabel (Gorman) Barrett. She had three brothers, Maurice Jr., John, and James and one sister, Alice Goeppner. The Barrett’s made national news, including Life Magazine, by being the first family to have 5 children born by caesarean section. While attending Mercy High School in Chicago, Therese also worked at a shoe store and after high school worked for the Gas Company in Chicago. On October 20, 1945, she married Robert L. Robinson at St. Columbanus Church in Chicago. Bob joined the Navy in 1939, served overseas during WW2 and Therese became a Navy wife, living in Gages Lake, IL, Charleston, SC, Panama Canal Zone, and San Diego, CA until Bob retired from the Navy with 20 years of service. Therese and Bob then purchased the Robinson Family Farm east of Lovilia, where they farmed together while raising their 8 children. Bob also worked as a Lab Technician at the VA Hospital and Therese worked as a teachers aid, first in Lovilia and then at Kendall School in Albia. When her husband’s health was failing, they moved to their home in Albia. Therese and Bob shared 45 years of marriage prior to his passing on November 27, 1990. Therese loved music of all kinds but especially Big Band Music. In fact, Therese and Bob’s first date was dancing at the Trinanon Ballroom in Chicago to the Lawrence Welk Orchestra. They danced to all the Big Band of that Era, including Glenn Miller, one of her favorites. They also loved dancing at the St. Peter’s Hall in Lovilia. She loved to host large gatherings of family and friends, totally enjoying her loud, rambunctious family! Therese was a playground teacher at Kendall School and often she would have former students remark how they loved when she pushed them on the swings, doing “under dogs”, or some remembered her making them stand against the wall for some infraction. Her own children knew her tough, no nonsense approach and knew they had better heed her warnings or pay the consequence. Therese was a very good cook and one of her most popular meals was homemade spaghetti sauce with homemade bread, followed by homemade pie made from fruits that she had picked and frozen herself. She was very nurturing. A favorite memory of her children’s is getting off the school bus when it had snowed and they had to walk down a long lane and she would have hot cocoa waiting for them. This nurturing and concern was still evident even in her last days in the hospital. She spoke to those with her that she wanted them all to “find a bed and go to sleep”…she said, “I want you to be safe & warm.” Therese is survived by her 8 children, Gary Robinson of Knoxville, IA, Mary (Dick) Barnard of Oskaloosa, IA, Karen (Jerry) Fontinel of Albia, IA, Ray (Nenette) Robinson of Colorado Springs, CO, Carl Robinson (Pam Blommer) of Waterloo, IA, Linda (Doug) Yates of El Dorado, KS, Mark (Amy) Robinson of Albia, IA, and Janet (Nick) Billings of Albia, IA; 14 grandchildren; 8 great grandchildren; 2 great-great grandchildren; and a sister-in-law, Carolyn Barrett of Santa Barbara, CA. Therese is also survived by many nieces and nephews. Due to the current State of Public Health Disaster Emergency and the COVID-19 pandemic, no visitation is planned at this time. A private family funeral service will be held on Friday, April 24, 2020 at St. Mary’s Catholic Church in Albia, with Father Mark Yates, C.PP.S. officiating. Burial will follow services at St. Peter’s Cemetery in Lovilia, IA. An open memorial has been established to be determined at a later date. Memorials or cards of condolences can be directed to Karen Fontinel at 22 G Ave. West, Albia, IA 52531.

Therese Evelyn (Barrett) Robinson, age 93, of Albia, passed away on Tuesday, April 21, 2020, under the care of EveryStep Hospice at the Monroe County Hospital in Albia. Therese was born on October 6, 1926, in Chicago, IL, to Maurice... View Obituary & Service Information

The family of Therese Evelyn Robinson created this Life Tributes page to make it easy to share your memories.

Send flowers to the Robinson family.