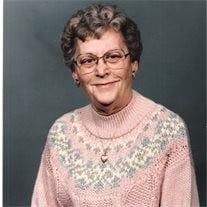 Theresa Campbell of Albia, Iowa passed away at the age of 88 at her home Wednesday, December 27, 2006. Theresa was born in Tyrone, Iowa August 23, 1918 to Robert and Madge (Watkins) Wilson. She married Tom Campbell December 20, 1941 in Albia,... View Obituary & Service Information

The family of Theresa Campbell created this Life Tributes page to make it easy to share your memories.

Theresa Campbell of Albia, Iowa passed away at the age of 88...

Send flowers to the Campbell family.