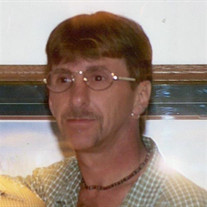 Terry “Critter” Wayne Allen, age 56, of Albia, passed away Saturday, November 5, 2016, under the care of Care Initiatives Hospice at Oakwood Specialty Center in Albia, Iowa. Terry was born November 15, 1959, to Wayne and Virginia (Ammons) Allen in Albia. He graduated from the Albia High School with the Class of 1978. On June 8, 1984, he was united in marriage to Judith Van Klavern and to this union, one son was born, Josh Allen. Terry and Judith later divorced and he shared his life with Sally Kendall until she passed away on December 11, 2011, in his arms. Terry was a welder and worked at Kness Manufacturing, Maytag, Vermeer, Cargill, Superior Machine, and Mo Co Pork. Terry was an avid outdoorsman and was happiest out in the timber camping and living off of the land. In his younger years, he loved to hunt and trap. He enjoyed fishing, mushroom hunting, and arrow head hunting, as well as going for rides to look for deer and turkey. He was very talented and enjoyed drawing and making many things out of wood, such as walking sticks and crosses. Terry loved spending time with his dog, Buddy. His true joy in life was spending time with his family and friends, especially his son, Josh. Terry is survived by his son, Josh Allen of Melrose; 2 siblings, Connie (Bill) Barnes of Lovilia and Karen Pottorff of Albia; 5 nieces, Julie Spears of Rose Hill, Dana Barnes Lennie of Indianapolis, IN, Amy Simmons of Grimes, Ginny Halling of Des Moines and Missy Lenger of Jerome, Iowa; and several great nieces and nephews. He is also survived by a very close friend, Gary McGrath. He was preceded in death by his parents, Wayne and Virginia; a brother Gary; a brother-in-law, Pete Pottorff; and his companion, Sally Kendall. A graveside service will be held at 11:00 a.m., Thursday, November 10, 2016, at the Iconium Cemetery in Iconium, with Pastor Lynda Carlson officiating. Visitation will be held from 2:00 p.m. to 8:00 p.m. Wednesday, November 9, 2016, at Tharp Funeral Home in Albia, with Terry’s family present from 5:00 to 8:00 p.m. Memorials have been established to the family.

The family of Terry Wayne Allen created this Life Tributes page to make it easy to share your memories.

Send flowers to the Allen family.