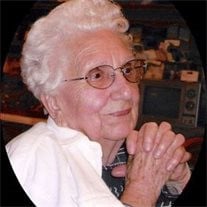 Sylvania A. Unruh age 94, of Albia, Iowa died early Sunday morning, November 19, 2006 at the Monroe County Hospital in Albia after a brief illness. Funeral services will be held at 2:00 P.M. Tuesday, November 21, 2006 at the Trinity United Methodist Church in Albia with Rev. Kevin Leveck officiating. Burial will follow the service in Union Chapel Cemetery north of Albia. Visitation will open after 11:00 A.M. on Tuesday, November 21 at the Trinity United Methodist Church in Albia and the family will greet friends from 1:00 P.M. until the time of the service. Sylvania was born November 24, 1911, to August and Bertha Tiehm in Goodrich, North Dakota. She graduated high school in Goodrich. She married David Unruh on October 25, 1935. To this union three daughters were born. The family made their home in Goodrich until 1957 when they moved to Oroville, California. After David’s untimely death in 1965, Sylvania attended college and earned a degree in Licensed Vocational Nursing in 1969. She worked as a nurse for many years. In 1989 Sylvania moved to Albia, Iowa, to live near her daughter and son-in-law Joyce and George Mosley where she resided until her death. To know Sylvania was to be in the presence of a woman of faith. She devoted her life to her husband, children, and their families as well as to her church family. Sylvania loved playing the piano and singing, especially songs of faith. She enjoyed people and had many lifelong friends. She was an avid quilter and enjoyed other crafts like knitting and crocheting. Sylvania is survived by three daughters, Joyce (George) Mosley of Albia, Carol Clough of Twin Falls, Idaho and Bekki Dekker of Thousand Oaks, California; two sisters, Lillian Brinkerhoff of Sun City, Arizona and Cordelia Reinhart of Stockton, California; one brother Harold (Betty) Tiehm of Brookings, Oregon; grandson Mark (Marsha) Mosley, granddaughters Caroline Dolezal, Julie (Guy) Truicko, Laurie (Russell) Hitchcock; step-grandsons Mark (Caroline) Dekker, Eric Dekker and Alan (Denise) Dekker; nine great grandchildren, three great-great grandchildren, and many nieces and nephews. She was preceded in death by her parents; her husband David; four brothers; one sister; and one granddaughter. Memorials have been established to Hospice of Monroe County or to Trinity United Methodist Church in Albia. Condolences may be made at www.winfieldfh.com

The family of Sylvania A. Unruh created this Life Tributes page to make it easy to share your memories.

Send flowers to the Unruh family.