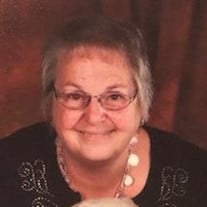 Suzanne Eleanor Roberts, age 70, of Albia, passed away on Saturday, November 9, 2019, at her home in Albia. Suzanne was born on January 7, 1949, to Everette Wilmet Harris Sr. and Eleanor Pauline (Nucko) Harris in Des Moines, Iowa. She grew up and attended East High School in Des Moines and graduated with the class of 1967. On November 14, 1981, she was united in marriage to Larry Roberts at the Methodist Church in Albia. Suzanne was a homemaker in Des Moines before working at the family business, Veteran’s Bait Shop. After moving to Albia, Suzanne was a Public Health Aide. She enjoyed going to casinos and shopping in stores with her best friend, Vicki, as well as shopping online. She also enjoyed crafts, making jewelry, scrapbooking, and sewing. Suzanne also enjoyed spending time with her family, especially her grandchildren. Suzanne is survived by her 2 children, Mindy Stafford of Albia and Meagan (Erik) Vos of Albia; and 4 grandchildren; Jeren, Jalen, Evan, and Olivia. Suzanne is also survived by her best friend of 65 years, Vicki Stookey. She was preceded in death by her husband, Larry; her parents, Everette and Eleanor Harris; and a brother, Everette Harris Jr. Per Suzanne’s wishes, her body has been cremated and there are no services planned at this time.

The family of Suzanne Eleanor Roberts created this Life Tributes page to make it easy to share your memories.

Suzanne Eleanor Roberts, age 70, of Albia, passed away on Saturday,...

Send flowers to the Roberts family.