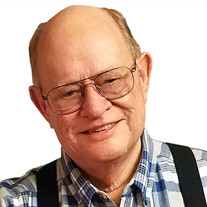 Steven Conrad Larson, age 78, of Albia, passed away Thursday, May 3, 2018, at his home in Albia. Steve was born on August 26, 1939, to Jean and Isabelle (Peterson) Larson in Davenport, Iowa. He graduated from the Davenport High Class of 1957 and from Bradley University in 1959 where he obtained a drafting degree. On August 29, 1959, he was united in marriage to Marilyn Mae Fuller at Grace Lutheran Church in Davenport, Iowa. To this union four children were born, Kirk, Anita, Wendy, and Sandra. Together Steve and Marilyn shared 58 years of marriage prior to her passing on October 1, 2017. Steve began working at Swan Engineering in Davenport after college and then in 1971 became the plant manager of Chicago Rivet & Machine Company in Albia where he worked until his retirement. He had a passion for cars, always keeping them in tip-top shape. He had a Model A for several years and was part owner of a stock car in the 1960’s. He was an avid collector of Lionel model train memorabilia and antique toys. His real joy in life was spending time with his family and friends, especially his grandchildren. Steve is survived by his children, Kirk (Deborah) Larson of Lake Ozark, MO, Anita (Terry) Simmons of Albia, Wendy (Chris) Gabler of Minnetonka, MN; and Sandra (Roger) Travis of Frisco TX; 11 grandchildren, Kyle (Rachel), Tyler (Kelly), Jesse, Cody, Ashley (Jared), Zach, Nick, Abby, Alex, Brenna and Kaelan; three great grandchildren, Kelsey, Sawyer, and Viktor; a brother, Kenneth Larson and several nieces and nephews. He is preceded in death by his wife, Marilyn and his parents, Jean and Isabelle. Funeral services will be held at 10:30 a.m., Wednesday, May 9, 2018, at St. Paul’s Lutheran Church in Albia, with Pastor Nancy Reed officiating. Burial will follow the service at Oak View Cemetery in Albia. Visitation will begin at 1:00 p.m. until 8:00 p.m., Tuesday, May 8, 2018, at Tharp Funeral Home in Albia with Steve’s family present from 5:00 p.m.-8:00 p.m. to greet family and friends. Memorials may be made to St. Paul’s Lutheran Church or the Monroe County Historical Museum.

Steven Conrad Larson, age 78, of Albia, passed away Thursday, May 3, 2018, at his home in Albia. Steve was born on August 26, 1939, to Jean and Isabelle (Peterson) Larson in Davenport, Iowa. He graduated from the Davenport High Class of... View Obituary & Service Information

The family of Steven Conrad Larson created this Life Tributes page to make it easy to share your memories.

Send flowers to the Larson family.