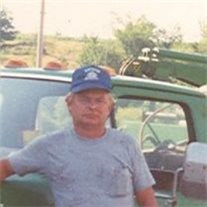 Steven Parker Bossard, age 58, of Albia, Iowa died late Sunday, August 6, 2006 at his residence in Albia. He was born February 10, 1948 in Eldora, Iowa to Lawrence and Phyllis (Johnson) Bossard. He married Patty (Jones) Pottorff on October 4, 1992. He had worked for Burlington Northern Railroad as a mechanic and a member of its Union. Steven is survived by his wife, Patty of Albia; three children: Tammy Williamson of Ottumwa, Lawrence "Bo" Bossard of Albia, and Justin Bossard of Melrose; one step-son, Mike Pottorff of Albia; 7 grandchildren and one great granddaughter. Also surviving is one sister, Delayne Ganser of Cleveland, North Dakota. He was preceded in death by his parents; one brother, John Bossard; and one sister, Elizabeth Bossard. Cremation was accorded with family wishes. Memorial services will be held at 11:00 A.M. Thursday, August 10, 2006 at the Winfield Funeral Home in Albia with Rev. Tim Stoller officiating. Burial of cremains will follow the service at the Service Chapel Cemetery north of Albia. Visitation will open after 11:00 A.M. Wednesday, August 9 at the Winfield Funeral Home in Albia with the family present from 6-8 P.M. that evening. Honorary Casketbearers will be Steve, Mike, and Jimmy Brouse, Jamie Bossard, Carl Rominger, Jr. and Clarence Thomas. Memorials have been established to the family.

The family of Steven Parker Bossard created this Life Tributes page to make it easy to share your memories.

Send flowers to the Bossard family.