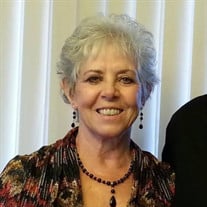 Sharon Kay Hamlin, age 76, of Albia, IA, passed away on Friday, July 2, 2021 at the Homestead of Albia. Sharon was born on May 14, 1945, to George and Eunice Fancheon (White) Miner at St. Joseph’s Hospital in Centerville, IA. She grew up attending school in Centerville and graduated from the Centerville High School. She later obtained her Bachelor’s degree in nursing from the University of Illinois. In 1964, she was united in marriage to Billy Main and to this union, 2 children, Jeff and Marla, were born. Sharon and Billy later divorced and she married Glen Hamlin whom she also later divorced. Sharon was a devoted nurse the majority of her adult life. She thoroughly enjoyed caring for others and loved each of them dearly. She began this journey in nursing as a Nurse’s Aide at the Golden Age Care Center in Centerville. She then went to work at Illini Hospital for over 25 years where she was an emergency room nurse assisting on the ambulance and life flight as well. During that time, Sharon also worked weekends at the Quad City Downs race track. Sharon donated her time during the summers working as a nurse at church camps. In later years, she also worked at Home Health Care Pediatric Specialties, in occupational nursing and was a casino clinic nurse. Sharon was very active. In her younger years, she attended many ball games to watch her children, grandchildren, and nieces and nephews. She enjoyed being outdoors and gardening. She was an avid mall and river walker, where she enjoyed getting hotdogs and feeding the ducks with her grandchildren. She participated in water aerobics, jazzercise, and dance. She loved to bicycle and was a talented bowler as well as traveling. Sharon loved animals and her special dog, Cotton. Sharon’s true joy in life was spending time with her family and friends, especially her grandchildren and great grandchildren. Sharon is survived by her children, Jeff (Kim) Main and Marla (Randy) Bronson; 7 grandchildren, Danny Bronson, Derik (Olivia) Bronson, Drake (Jasmine) Bronson, Mackenzie (Aj Lenger) Main, Bailey (Josh Iiams) Main, Zack Main, and Brody Main; 3 great grandchildren, Liam, Lincoln, and Isaiah Bronson; a sister, Sandra Fincher; a sister-in-law, Deb Glassford; and a brother-in-law, Robert Campbell. Sharon is also survived by several nieces, nephews, cousins, and good friends. She was preceded in death by her parents, George and Eunice Miner; sisters, Berniece Latham, Peggy Miner, and Martha Campbell; 2 brothers, George and Harold Miner; and brother-in-law, Robert Fincher. Visitation will be held from 9:00 a.m.-11:00 a.m. on Wednesday, July 7, 2021, at the Tharp Funeral Home in Albia, with Sharon’s family present to greet family and friends. A memorial service will be held at 11:00 a.m. on Wednesday, July 7, 2021, at the Tharp Funeral Home in Albia with Pastor Richard Grimes officiating. Burial will follow services at Salem Cemetery in Appanoose County. Honorary pallbearers consist of her nieces and nephews: Patricia Schmid, Robin, Vernon and Miles Latham, Ricky and Bobby Fincher, Larenda and Mike Campbell, and Ben Miner. A memorial has been established to plant a tree at Butterworth Park near the Quad Cities in memory of Sharon.

The family of Sharon Kay Hamlin created this Life Tributes page to make it easy to share your memories.

Send flowers to the Hamlin family.