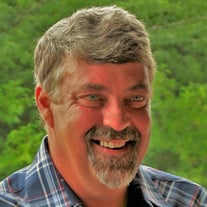 Scott Anthony Kromray, age 56, of Albia, passed away on Tuesday, February 26, 2019, at Monroe Care Center in Albia surrounded by his family. Scott was born on August 1, 1962, in Albia, IA, to Gene and Donna (Gray) Kromray. He grew up and attended school in Albia, graduating from the Albia High School with the Class of 1980. After high school, Scott began working for Harry Felton at Felton’s Welding Shop in Albia. He later attended Indian Hills Community College in Ottumwa where he obtained his degree in welding and machine tech. Scott worked for Harry for many years before eventually purchasing the shop from Harry and continuing to own and operate the welding shop. He was a very talented man who had the capability of making or fixing anything. He could weld anything from a coal miner’s bucket to a lady’s earring. Scott was a member of the Monroe County Saddle Club, Pheasants Forever, and 4-H in his younger years. He was a gifted athlete in high school, earning all-conference honors in football as a tackle. Scott also enjoyed the outdoors, hunting, and fishing and loved to go on trail rides in Eminence, MO. He never knew a stranger and enjoyed visiting with others, having a cold drink, and telling others stories. Scott was always very proud of his boys and delighted in talking about them and their accomplishments. Scott is survived by his girlfriend, Sheryl Kaster; his three sons, Austin Kromray, Jarrod (Mallory Gwinn) Kromray, and Trevor (Taylor Guffey) Kromray; a grandson, Kashdon Kromray; his parents, Gene (Rene) Kromray and Donna Kromray; 2 sisters, Norene Johnston and Kristin (Steve Harding) Kromray; a sister-in-law, Lynn Kromray; and 3 aunts, JoAnn Ahn, Loretta Martin, and Barbara Shelquist. He is also survived by many nieces, nephews, cousins, and good friends. He was preceded in death by his grandparents, Anthony and Inez Kromray and Louie and Hugh Gray; and a brother, Bryon Kromray. A Celebration of Scott’s life will be held on April 20, 2019, at the American Legion in Albia beginning at 1:00 p.m., with his family present to greet friends.

Scott Anthony Kromray, age 56, of Albia, passed away on Tuesday, February 26, 2019, at Monroe Care Center in Albia surrounded by his family. Scott was born on August 1, 1962, in Albia, IA, to Gene and Donna (Gray) Kromray. He grew up and... View Obituary & Service Information

The family of Scott Anthony Kromray created this Life Tributes page to make it easy to share your memories.

Scott Anthony Kromray, age 56, of Albia, passed away on Tuesday,...

Send flowers to the Kromray family.