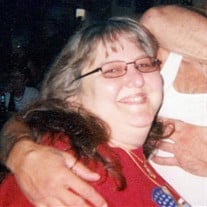 Sandra “Sandy” Lou Deney, age 58, of Albia passed away on Wednesday, March 29, 2017, at her home in Albia. Sandy was born September 28, 1958 to Dwight Lewis Sr. and Helen Elizabeth (Mohler) McDaniel in Iowa City, Iowa. She attended school in Mingo, Iowa. She later received her GED and went on to earn her CNA license from Indian Hills Community College. Sandy worked as a bartender for most of her life and was employed at Pearl’s and Gordy’s in Centerville for several years. She never knew a stranger and could start a conversation with anyone. She enjoyed crocheting, collecting eagles and Native American collectables. Her real joy in life was spending time with family and friends. Sandy is survived by her son, Jeremy (Emily) Price of Albia; three brothers, Dwight “Jr” Lewis McDaniel, Steve (Judith) McDaniel and Ed (Dee) McDaniel; a half-sister, Susan Randall; five grandchildren, Dalton, Zachary, Jaden, Shayley and another on the way. She is also survived by her nieces, Camryn, Kaitlyn, Stephanie, Melvin and Harley. She was preceded in death by her Parents, Dwight Sr. and Helen McDaniel and a boyfriend, Bob. Memorial services will be held at 10:30 a.m., Monday, April 3, 2017, at the Tharp Funeral Home in Albia, with Pastor Brad Gray officiating. Burial will follow the service at Highland Cemetery in Mystic, Iowa. Visitation will be held from 2:00 p.m. until 8:00 p.m., Sunday, April 2, 2017, at the Tharp Funeral Home in Albia, with Sandy’s family present from 6-8 p.m. to greet family and friends. An open memorial has been established to Sandy’s family.

The family of Sandra "Sandy" Lou Deney created this Life Tributes page to make it easy to share your memories.

Send flowers to the Deney family.