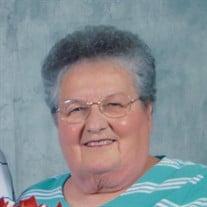 Ruth Aileen Yenger, age 84, of Albia, passed away peacefully on October 20, 2018. Ruth was born on November 20, 1933 to Ralph and Pearl (King) Fisher on the family farm in rural Monroe County. She attended Albia High School, graduating Class of 1951. On April 26, 1954 she was united in marriage to John Russell Yenger. To this union four children were born, Vickie, Terry, Jeffrey, and Debbie. Ruth and John shared 58 years of marriage before his passing on July 5, 2012. Ruth was a homemaker for most of her working life while she raised her children. After the children grew up, she worked at Trophy Glove in Albia as a seamstress for several years. Ruth and John were members of the Lads and Lassies Square Dance Club for 10 years. After John retired, they delivered 74 Winnebago RV’s to destinations all over the United States. They always planted a large garden and shared the produce with family and friends. For several years, she and John spent the winter months in Big Bend, TX and Casa Grande, AZ. Ruth enjoyed playing cards, sewing, preparing meals her family referred to as “stuffing parties,” traveling, baking, camping, fishing, attending small Bluegrass festivals and other musical gatherings, going to the casino with her friends and attending her children and grandchildren’s events. Above all, Ruth enjoyed spending time with her family and friends. Ruth is survived by her children, Vickie Wilkinson of Albia, Terry (Kelley) Yenger of Newton, Jeff (Carol) Yenger of Albia and Debbie Yenger of Urbandale; 6 grandchildren, Jeremy, Tiffany, Travis, Tara, Ashley and Bradley; 7 great grandchildren, Izabella, Treyton, Ainsley, Benson, Tommy, Tessa, Gabriel and 3 more expected in November and 2 brothers, Max (Beverly) Fisher and Ronald Fisher. She is also survived by many nieces and nephews. She is preceded in death by her parents, Ralph and Pearl; her husband, John Yenger and a sister, Lois Barnes and her husband, Charles; her sister-in-law, Donna Fisher and a son-in-law, Larry Wilkinson. Visitation will be from 2:00 p.m. until 8:00 p.m. on Tuesday, October 23, 2018, at the Tharp Funeral Home in Albia with Ruth’s family present from 6:00 until 8:00 p.m. to meet and greet family and friends. A funeral service will be held at 2:00 p.m. on Wednesday, October 24, 2018, at the Tharp Funeral Home in Albia, with Pastor Richard Grimes officiating. Burial will follow services at the Oak View Cemetery in Albia. An open memorial has been established to the family to be determined at a later date. Condolences to the family may be left online at www.tharpfh.com.

The family of Ruth Aileen Yenger created this Life Tributes page to make it easy to share your memories.

Send flowers to the Yenger family.