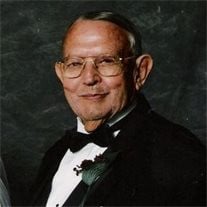 Roy Webster Patton, age 81, of Albia, Iowa former resident of Des Moines, Iowa died Wednesday, November 8, 2006 at his residence in Albia. He was born April 12, 1925 in Olathe, Kansas to Walter H. and Hattie (Vaughn) Patton. He married Gloria Gray on February 28, 1948 in Kansas City, Missouri. Roy had attended Rockhurst College in Kansas City specializing in business and finance. He was a veteran of World War II having served in the U.S. Navy. He worked for Skelly Oil Company in Kansas City, Missouri and Des Moines, Iowa and as a branch manager and investment banker for Bankers Trust in Des Moines for several years before retiring. He was a member of the First Presbyterian Church in Des Moines, Iowa. He enjoyed gardening and flowers, and his lifelong hobby was cooking. He is survived by his wife, Gloria of Albia; one daughter, Renee Patton-Knowles and husband Mark of Albia, Iowa and one son, R. Randall Patton and partner Gene Rozenboom of Palm Desert, California; two grandchildren, Derek Randall and Ryker Webster Rozenboom. Also surviving is one brother, Charles Patton and his wife Winona of Independence, Missouri along with many nieces and nephews. Roy was preceded in death by his parents and 6 other brothers and sisters. Funeral services will be held Saturday, November 11, 2006 at 2:00 P.M. at the Winfield Funeral Home in Albia with Rev. Lynda Carlson officiating. Cremation will follow the service. An open visitation will begin Saturday after 12:00 P.M. at the Winfield Funeral Home in Albia until the time of the service. Memorials have been established to the Botanical Center or to the Animal Rescue League both of Des Moines.

The family of Roy Webster Patton created this Life Tributes page to make it easy to share your memories.