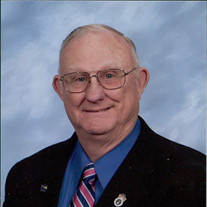 Rowland Franklin Barnes Sr., age 83, of Albia, passed away peacefully on Thursday, June 28, 2018 at the Monroe County Hospital in Albia, Iowa. He was born on February 5, 1935 to Germain and Blodwen (Jones) Barnes in Lovilia, Iowa. He grew up and graduated from the Albia High School with the Class of 1952. On October 10, 1954 he was united in marriage to Mary Lou Johnson in Oskaloosa, Iowa. He joined the United States Air Force in 1955 and served his country in Korea and Vietnam. He was a career military man and retired after 24 years of service. After retiring from the military, Rowland worked at Pamida for a short time before going to Chamberlains in Albia, he was a custodian at the Albia High School, helped work visitation and funeral services at funeral homes and worked as a volunteer coaching softball and little league baseball. Rowland was a dedicated member of the Masons Astor Lodge No. 505. in Albia, serving as the treasurer for many years. He was a member of the American Legion Howard Cessna Post #136 and a past member of the Fraternal Order of Eagles. Rowland was a joyful person. He never knew a stranger and enjoyed talking and interacting with people, going to Hardees to have coffee time and enjoyed riding and looking at new vehicles. Above all else, he delighted in spending time with his family and friends. Rowland is survived by his wife of 63 years, Mary Lou Barnes of Albia, his children, Charles Barnes of Albia and Rowland F. Barnes Jr. of Albia; two grandchildren, Joshua Barnes and Jennifer (Joe) Sisler of Albia and a sister, Shirley Ann Argus. He is preceded in death by his parents, Germain and Blodwen, a brother, Bob Barnes; his mother-in-law Mary Fern McMillan and father-in-law, Earl Johnson. Visitation will be held from 1:00 p.m. to 8:00 p.m. Monday, July 2, 2018, at Tharp Funeral Home in Albia, with Rowland’s family present from 5:00 to 8:00 p.m., with Masonic Rites provided by Astor Lodge #505 will be held at 7:00 p.m. Funeral services will be held at 10:30 a.m., Tuesday, July 3, 2018, at the Trinity United Methodist Church in Albia with Pastor Roger Henry officiating. Burial with military rites provided by the American Legion of Albia, Melrose and Lovilia will follow services at Oak View Cemetery in Albia. Memorials have been established to the family to be determined at a later date.

Rowland Franklin Barnes Sr., age 83, of Albia, passed away peacefully on Thursday, June 28, 2018 at the Monroe County Hospital in Albia, Iowa. He was born on February 5, 1935 to Germain and Blodwen (Jones) Barnes in Lovilia, Iowa.... View Obituary & Service Information

The family of Rowland Franklin Barnes Sr. created this Life Tributes page to make it easy to share your memories.

Send flowers to the Barnes family.