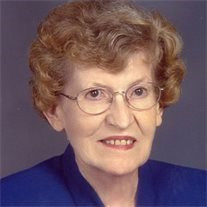 Rosemary A. Lahart, age 81, of Melrose, Iowa died early Monday morning, June 12, 2006 at the Monarch Wing of Skiff Medical Center in Newton, Iowa. She was born on her parents farm May 12, 1925 near Weller, Iowa to Matt and Agnes (Kirby) Lewis. Upon graduation from Ottumwa Heights Academy, she received her teaching certificate from William Penn College in Oskaloosa. Rosemary taught in a country school near Weller in Monroe County for a couple of years. She had also worked as a nanny in Omaha and as an office assistant in Des Moines. She married Joseph W. Lahart on February 23, 1952 in St. Mary's Catholic Church in Weller. To this union they had five sons and one daughter. After her and Joseph were married she became a homemaker. Joseph passed away October 25, 1998, and she continued to manage the family farm. Rosemary was a member of St. Patrick's Catholic Church in Melrose and a 50-year member of its Altar & Rosary Society. She also had helped for many years with the CCD classes at St. Patrick's in Melrose. Rose was also a 50 plus year member of the Russell American Legion Auxiliary. She is survived by 5 sons, William (Melanie) Lahart of Newton, Matt (Nancy) Lahart of Chariton, John (Bethany) Lahart of Chariton, Marty (Teresa) Lahart of Chariton, and Dan Lahart of Davenport; one son-in-law, Brett Van Bortel of Winfield, IL; 15 grandchildren: Joseph, Brenda, Catherine, Ellen, Mark, Kirsten, Sydney, Michael, Patrick, James, Carla, Kellie, Kasey, Luke, and Ben. Also surviving are 3 nieces; 2 nephews; and one cousin, Martin (Marilyn) Tierney. She was preceded in death by her parents; her husband; one daughter, Joan Lahart-Van Bortel; one granddaughter, Katelynn Lahart; 4 brothers: two brothers in infancy, and Robert and John Lewis; and two sisters, Eileen Karpan and Rita Schaal. Funeral services will be held at 10:30 A.M. Wednesday, June 14, 2006 at the St. Patrick's Catholic Church in Melrose with Rev. Scott Lemaster officiating. Burial will be held in the Mt. Calvary Cemetery in Melrose. Visitation will be held Tuesday, June 13 from 3-4 p.m. at the Winfield Funeral Home in Albia. At 4:00 P.M. we will move to St. Patrick's Catholic Church in Melrose with visitation beginning at 5:30 P.M. with the family present. A Wake Service will be held at 7:00 P.M. at St. Patrick's in Melrose. Memorials have been established to Mt. Calvary Cemetery in Melrose and to the St. Mary's Cemetery in Weller.

Rosemary A. Lahart, age 81, of Melrose, Iowa died early Monday morning, June 12, 2006 at the Monarch Wing of Skiff Medical Center in Newton, Iowa. She was born on her parents farm May 12, 1925 near Weller, Iowa to Matt and Agnes (Kirby) Lewis.... View Obituary & Service Information

The family of Rosemary Agnes Lahart created this Life Tributes page to make it easy to share your memories.

Send flowers to the Lahart family.