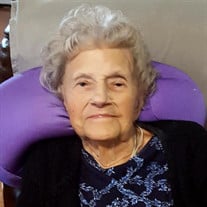 Rose Marie Schelker, age 86, of Albia, died Monday, June 14, 2021 at North Mahaska Specialty Care in Oskaloosa, Iowa, under the care of Care Initiatives Hospice, surrounded by her loved ones. She was born April 26, 1935 in North Platte, Nebraska to Clifford and May (Hertline) Anderson. She married Richard Eugene Schelker Sr. on October 14, 1957 in Lancaster, MO. They shared 43 years of marriage prior to his passing on March 16, 2001. Rose attended school in Ottumwa, Iowa completing Jr. High School and then returned to school and earned her GED after her children were raised. Rose worked for Chamberlains in Albia before going to the newspaper office and later worked at Neva’s Noodles. Rose sold Avon to many members of the community for more than 20 years. She was a devoted wife and mother. She was an avid reader, enjoyed crocheting and crafting, playing bingo and canasta. She attended the Reorganized Latter Day Saints Church. She is survived by one daughter, Roxanna (Gary) Ciprian of Ozark, MO and four sons, Richard Schelker Jr. of Albia, Wade (Laurie) Schelker of Oskaloosa, Matthew (Julie) Schelker of Des Moines and Karlin Schelker of Rock Island, IL; She is also survived by 11 grandchildren, 17 great-grandchildren, 3 great-great grandchildren, a brother, Paul (Pat) Anderson of Ottumwa and several nieces, nephews, cousins, and good friends. She was preceded in death by her husband, Richard; an infant child, an infant sister, Nancy Ellen, infant twin brothers, her sisters, Mary Ann Sellwood, and Sarah Jane Spilman; 3 grandchildren; and one great-grandchild. Rose was also preceded in death by a daughter in law, Mary Schelker. Visitation will be held from 12:00 p.m.-2:00 p.m. on Saturday, June 19, 2021, at the Tharp Funeral Home in Albia, with Rose’s family present to greet family and friends. Funeral services will be held at 2:00 p.m., Saturday, June 19, 2021, at the Tharp Funeral Home in Albia. Burial will follow services at Pleasant Divide Cemetery in rural Monroe County. An open memorial has been established to the family and will be determined at a later date.

Rose Marie Schelker, age 86, of Albia, died Monday, June 14, 2021 at North Mahaska Specialty Care in Oskaloosa, Iowa, under the care of Care Initiatives Hospice, surrounded by her loved ones. She was born April 26, 1935 in North Platte,... View Obituary & Service Information

The family of Rose Marie Schelker created this Life Tributes page to make it easy to share your memories.

Send flowers to the Schelker family.