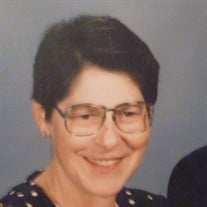 Rosalie “Rosie” Marie Hurgon, age 75, of Melrose, passed away on February 6, 2017, at the University of Iowa Hospital in Iowa City, Iowa. Rosie was born on April 7, 1941, to Cloyde and Dorothy (Jacobson) Beede in Kellerton, Iowa. She attended the Mt. Ayr High School and graduated with the Class of 1959. On October 27, 1962 she was united in marriage to Kenneth Hurgon in Des Moines. To this union a daughter was born, Stephanie. Together Rosie and Kenny shared 54 years of marriage. Rosie was a homemaker throughout her life. She also worked as a teacher’s aide for the Saydel School District before taking a job as a CNA at the Valborg Lutheran Home as a medical aide in Des Moines for 20 years. She retired in 1999 and she and Kenny moved to Melrose. She was a former member of St. Joseph’s Catholic Church in Des Moines and was an active member of St. Patrick’s Catholic Church in Melrose. Rosie was a member of St. Patrick’s Green Hats and was active in the church. She assisted with funeral luncheons and other community dinners. She was an avid fisherman and for 40 years she traveled with Kenny up to northern Minnesota to camp and fish for Northern Pike. She enjoyed being outdoors, hunting, gardening, and her three cats Sammy, Tiger, and Funny Face. Her real joy in life was spending time with her family and friends. Rosie is survived by her husband, Kenny Hurgon; her daughter, Stephanie Hurgon; three grandchildren, Amber Olinger, Brett (Cassie) Rork Jr and Randi Kay (Mark) Crouse; three great grandchildren, Konnor Smith, Emma Olinger and Rylie Kay Crouse. She is also survived by aunts, uncles, cousins and her good friends, Sister Lucille Feehan, Esther Cybert and Florene Schroder. She is preceded in death by her parents, Cloyde and Dorothy and a granddaughter, Jessica Rork. A Mass of Christian Burial will be held at 10:30 a.m., Saturday, February 11, 2017 at St. Patrick’s Catholic Church in Melrose, with Father Mark Yates C.PP.S. and Father Michael Volkmer C.PP.S. officiating with Deacon Edwin Kamerick assisting. Burial will follow services at Mt. Calvary Cemetery in Melrose. Visitation will be held from 3:00 p.m.-8:00 p.m. Friday, February 10, 2017 at St. Patrick’s Catholic Church in Melrose, with Rosie's family present from 4 to 6 p.m. to greet family and friends. A 6:00 p.m. rosary will be led by St. Patrick’s Altar and Rosary Society followed by a wake service. A memorial has been established to St. Patrick’s Catholic Church in Melrose.

The family of Rosalie "Rosie" Marie Hurgon created this Life Tributes page to make it easy to share your memories.

Send flowers to the Hurgon family.