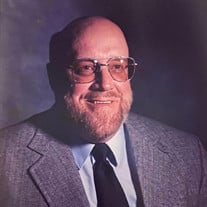 Ronald “Ronnie” Lee DeMoss, age 81, of Albia, passed away on Friday, January 29, 2021, at his home in Albia, under the care of EveryStep Hospice. Ronnie was born on August 4, 1939, to Ernest K. and Odetta Mae (Kinsey) DeMoss in Lockman, IA. He graduated from the Albia High School with the Class of 1958. He served his country in the United States Army from 1962-1964. Upon his return home, Ronnie married Andrea Welt and to this union 3 children were born, Deanna, Lee, and Gail. Ronnie and Andrea later divorced. In 1994, Ronnie was united in marriage to Vickie Shilling at the Pine Creek Baptist Church in Quasqueton, IA. Ronnie worked many jobs over the years. He worked at Maloney’s, L & S Tools, and Chamberlain’s in Albia. Ronnie then worked for Extruders Inc. in Texas before going to Colorado and working for Guaranteed Products of Colorado. Ronnie then returned to Iowa and went to work for Pries Enterprises, Inc. in Independence, then moved onto Superior Machine in Oskaloosa, and later at Quamco in Quasqueton, IA, finally Ronnie finished his working career at Iowa Aluminum in Albia, Iowa. Ronnie was a member of the American Legion. He loved to be outdoors, especially fishing, hunting, and shooting guns for target practice, as well as bird watching. Above all else Ronnie enjoyed spending time with his family and friends. Ronnie is survived by his wife, Vickie; 4 children, Deanna (Jim) Riley, Lee Alan Demoss, Harold Emery “Bucky” Brink Jr., and Melinda “Mindy” (Pete) Conn; 13 grandchildren Teri Eastlick, Jeremy Taylor, Jessica Coffman, Jordan Taylor, Jamee Taylor, Daniel Stafford, Neveah Cavin, Madisyn Brink, Barza Graf, Ocean Brink, Cyriss Brink, Zachary Conn and Lailynn Conn; 9 great-grandchildren Kennick, Ayden, and Lincoln Eastlick, Nathan Coffman, Kelsie and Miles Taylor, Ethan and Nathan Stafford, and Oaklynn Graf. He is also survived by his good friends Paul Kness, Gracie DeMoss, Joyce Larson, Patty & Jim James, Mary Belzer, and Jeff Pasa. He was preceded in death by a daughter, Gail Ilene DeMoss; his parents, Ernest and Odetta; and a brother, Ernest DeMoss Jr. Visitation will be held from 9:00 a.m.- 11:00 a.m. on Saturday, February 6, 2021, at the Tharp Funeral Home in Albia with Ronnie’s family present to greet family and friends. A memorial service will be held at 11:00 a.m. on Saturday, February 6, 2021, at the Tharp Funeral Home in Albia with military honors provided by the American Legion of Albia, Melrose, and Lovilia. Burial will follow services at Cuba Cemetery in Avery. Due to the most recent proclamation and enhanced public health measures for the state of Iowa, masks will be mandatory for those in attendance over the age of 2. The service will be livestreamed on the Tharp Funeral Home Facebook page. An open memorial has been established to be determined at a later date.

The family of Ronald "Ronnie" Lee DeMoss created this Life Tributes page to make it easy to share your memories.

Send flowers to the DeMoss family.