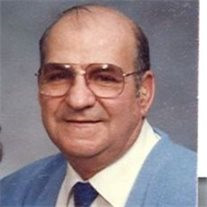 Robert "Bob" George Overmyer, age 84, of Albia died Thursday, February 16, 2006 at the Monroe County Hospital Emergency Room in Albia. Bob was born February 26, 1921 in Monroe County, IA to George and Elsie (Hocking) Overmyer. He married Katherine Barnes on September 21, 1951 at the Kendall Place in Albia, IA. Bob was a member of the U.S Army during World War II, stationed in Europe. After his military service, he farmed all of his life and worked various jobs. He worked construction, and at John Morrell Company for a short time. He also drove a school bus, and worked for Watson Gas Company. Bob was a member of the American Legion, Howard Cessna Post #136 of Albia. He is survived by his wife, Katherine of Albia; five Children, Sharon (Larry) Hemm of Eldon, Bobbi (John) Bassett) of Knoxville, Debbie (Mike) Berrier of Ottumwa, Peggy Terrell of Knoxville, and Scott (Jayme) Overmyer of Albia, IA; Bob is also survived by two sisters, Ruth Starrett, and Jane Lemonds both of Kellogg; one brother, Richard Overmyer of Dalzee, SC; 10 grandchildren, and 8 great grandchildren. Bob is preceded in death by his parents, George and Elsie; and one brother, Vernon Overmyer. Funeral services will be held at 10:30 A.M. Tuesday, February 21, 2006 at Winfield Funeral Home in Albia with Elder Lois Behrens officiating. Burial will follow services at Oakview Cemetery in Albia, with military rites conducted by Howard Cessna Post No. 136 American Legion of Albia. Visitation will begin after 10:00 A.M. Monday, February 20, 2006 at the Winfield Funeral Home in Albia with the family present from 6-8 P.M. Monday evening. Memorials may be given to the family.

The family of Robert George Overmyer created this Life Tributes page to make it easy to share your memories.

Send flowers to the Overmyer family.