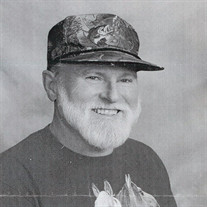 Robert “Bob” Joseph Major, age 71, of Albia, passed away on Monday, November 25, 2019, at Oakwood Specialty Care in Albia, under the care of Care Initiatives Hospice. Bob was born on November 30, 1947, in Albia, IA, to Robert Leo and Barbara Evelyn (Morris) Major. He grew up and attended school in Albia, graduating with the Class of 1966. He served his country in the United States Army. On June 19, 1987, he was united in marriage to Trudy Cox. Bob worked at Chamberlain’s in Albia and later at Maytag before taking a job at John Deere Ottumwa Works where he worked for 30 years before retiring in 2003. Bob enjoyed being outdoors, hunting, fishing, and riding horses and mules. He enjoyed attending the Rutledge flea markets and wheeling and dealing while there. He was a country music fan as well as a fan of John Wayne western movies. He enjoyed visiting with others and never knew a stranger. Above all, Bob cherished the time he spent with his family, especially his grandchildren. He is survived by his wife, Trudy Major of Albia; a son, Scott (Katie) Major of Albia; a stepson, Jeff (Lisa) Cox of Albia; a stepdaughter, Julie (Mark) McMillen of Menlo, IA; a sister, Peggy (Larry) Scales of Lemont, IL; and 6 grandchildren, Payton and Paisley Major, Mason and Jaylon Cox, Tyler McMillen, and Jessica Miller. Bob was preceded in death by his parents, Robert and Barbara and a stepson, Toby Cox. Visitation will be held from 2:00 p.m.-8:00 p.m. on Friday, November 29, 2019, at the Tharp Funeral Home in Albia, with Bob’s family present from 5:00 p.m.-8:00 p.m. to greet family and friends. Funeral services will be held at 12:30 p.m. on Saturday, November 30, 2019, at the Tharp Funeral Home in Albia. Following services, military honors will be provided by the American Legion of Albia, Melrose, and Lovilia. Per his wishes, Bob’s body will be cremated following the service and a private burial will be held at a later date. In lieu of flowers, memorials have been established to the Welcome Home Soldier Memorial in Albia and Care Initiatives Hospice.

The family of Robert Joseph Major created this Life Tributes page to make it easy to share your memories.