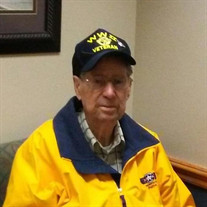 Robert William Gibson, age 92, of Oskaloosa and formerly of Albia, passed away on Thursday, October 25, 2018, at the Serenity House in Oskaloosa, Iowa. He was born on September 5, 1926, to Frank Robert and Sarah Jane (Teasdale) Gibson in Albia, Iowa. Following in the footsteps of his father and brother, Robert enjoyed the nickname “Boots.” He grew up and graduated from the Albia High School with the Class of 1944. Following graduation, Robert enlisted in the U.S. Navy Sea Bees in 1944 and served his country during WWII in Okinawa. He was honorably discharged in May of 1946 and was employed at the U.S. Naval Air Station in Ottumwa, Iowa until November of 1946. On July 18, 1947, he was united in marriage to Agnes Cecilia Nalevanko in Rock Island, Illinois. To this union, 2 daughters were born, Victoria Lynn and Helen Louise. Robert started working at the Veteran’s Administration Hospital in Knoxville, Iowa, in 1948. With a year’s break in service from the VA, he worked at the Post Office in Albia. He then returned to the VA, retiring from there in 1981 with 28 years of service. Robert had a total of 31 ½ years of government service at the age of 55. Robert and Agnes kept busy with farming while raising their daughters in Marion County, IA. Robert would milk dairy cows, plant row crops, and put up hay on his “off” hours from the VA. In 1970, Robert and Agnes purchased an acreage in Monroe County and built a new home. Robert’s additional skills abounded-carpenter, bricklayer, and plumber. His farm friends included Quarter horses, Black Angus calves, geese, and kitties. Robert and Agnes lived a happy life on the acreage for 40 years prior to her death. Boots enjoyed reading the Monroe County Newspaper and looking for the articles of memories past. One such article had this sports highlight mentioned: “1944-Bob Gibson’s last second basket earned a one-point win over the Bloomfield Maroons for our Demons, 28-27.” He also enjoyed going to the American Legion for stag night suppers, reading library books, and doing Sudoku. He was able to do the Rubik’s Cube completely, which his grandkids and great-grandkids thought was pretty cool. In 2009 at the young age of 82, Robert was so happy that he was able to go on the WWII Honor Flight to Washington D.C. He proudly wore his yellow jacket and black cap that everyone in the group was presented with before the flight. Many of you may have seen his trip pictures. Robert and his daughter, Helen, watched the progress of the Welcome Home Soldier monument being built. They made many a drive-by to “inspect.” Several family members have toured the site with him and he was always eager to go. Robert is survived by his 2 daughters, Vicki (Cliff) Avon and Helen (Denny) Smith; 4 granddaughters, Amy (Scott) Bredar of Eldridge, IA, Megan (Tom) Cox of Bettendorf, IA, Suzanne (Chris) Bauer of Indianola, IA, and Carmen (Kevin) Kelderman of New Sharon, IA; 10 great-grandchildren, Cael, Carley, & Cadey Bredar, Jacob & Carter Cox, Amanda & Mitchell Bauer, and Jensen, Ty & Jack Kelderman; and a sister, Debbie (Paul) Higginbotham of Sully, IA. Robert is also survived by many nieces and nephews. He is preceded in death by his wife of 64 years, Agnes; his parents, Sarah Jane and Frank Gibson; a brother, Matthew “Junior” Gibson; a sister and brother-in-law, Virginia and Ed Overturf; and a grandson, Jeffrey Robert Avon. Visitation will be held from 10:00 a.m. to 11:30 a.m. on Friday, November 2, 2018, at Tharp Funeral Home in Albia, with Robert’s family present to greet family and friends. Graveside services will be held at 12:00 p.m., Friday, November 2, 2018, at Oak View Cemetery in Albia, with Pastor Richard Grimes officiating. Military rites will be provided by the American Legion of Albia, Melrose and Lovilia. A memorial has been established to the Welcome Home Soldier Monument.

Robert William Gibson, age 92, of Oskaloosa and formerly of Albia, passed away on Thursday, October 25, 2018, at the Serenity House in Oskaloosa, Iowa. He was born on September 5, 1926, to Frank Robert and Sarah Jane (Teasdale) Gibson... View Obituary & Service Information

The family of Robert William Gibson created this Life Tributes page to make it easy to share your memories.

Robert William Gibson, age 92, of Oskaloosa and formerly of Albia,...

Send flowers to the Gibson family.