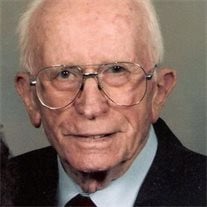 Robert John "Bob" Bradley, age 96, of Albia died Sunday, December 30, 2007 at the Monroe County Hospital in Albia, Iowa. Bob was born April 14, 1911 in Centerville, Iowa, to Albert and Ida (Williams) Bradley. Bob was schooled in Centerville, Iowa. After his education, Bob, began Bradley Produce and Feeds in Moulton. In 1961 Bob moved to Albia and owned and operated Bradley Produce until his retirement in 1978. On November 17, 1962 Bob married Jean Starns. They were married at the First Christian Church in Unionville, Missouri. Bob and Jean shared this union for 45 years. Bob was a member of the First Christian Church and the 1 - 2 Club of the American Legion Howard Cessna Post #136 both of Albia. One of Bob's biggest enjoyments was his motorized bicycle, which he rode in town for years. Bob is survived by his wife, Jean Bradley of Albia; his step children, Thom Knapp of Centerville, Nancy Reynolds and husband Jeff of Sarasota, Florida, Kathy Baker of San Jose, California, and Sally Kendall and husband Jim of Albia; seven grandchildren and two great grandchildren. Bob is also survived by one niece and one nephew. Bob is preceded in death by his parents, Albert and Ida; one brother, James Bradley. Funeral services will be held at 1:00P.M., Thursday, January 3, 2008, at the Winfield funeral Home in Albia with Rev. Lynda Carlson officiating. Burial will follow services at Oakland Cemetery in Centerville. Visitation will begin at 11:00 A.M., Wednesday, January 2nd, at the Winfield Funeral Home in Albia. Bob's family will be present from 6 to 8:00 P.M., Wednesday evening, and one hour prior to service time Thursday. A memorial will be established to the First Christian Church of Albia, or to Hospice of Monroe County.

The family of Robert John Bradley created this Life Tributes page to make it easy to share your memories.

Send flowers to the Bradley family.