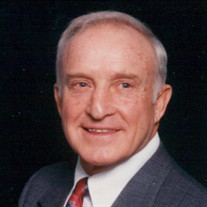 Robert “Bob” Spencer, age 87, of Des Moines, passed away on Sunday, August 30, 2020, at his home in Des Moines, IA. Bob was born on September 10, 1932, to John Earl and Wreatha (Pence) Spencer, in Albia, IA. He grew up attending school in Albia and graduated from the Albia High School with the Class of 1951. Following high school, Bob attended Parsons College where he was a successful athlete, lettering in Football and Track and Field. In 1953, Bob volunteered for the United States Army during the Korean War where he served as athletic non-commissioned officer in Bordeaux, France. While he was in Europe, he organized and coached, as well as played on, Football, Boxing, Volleyball, Softball, and Track and Field teams. Upon his return from the Army, Bob returned to Parson College where he served as the Senior Class President and graduated in 1957. Bob went to work at the Carlisle High School where he taught and was very active in the athletic programs. He coached Girls Basketball for 8 years, as well as Boys and Girls Track and Field and Cross Country. Bob started the Carlisle “Wildcat Relays.” During his career there, Bob also earned his Master’s Degree from Northern Colorado University. In 1965, Bob was hired as Professor, Director of Men’s Athletics, and the Dean of Students at John F. Kennedy College, where he initiated the first ever complete Women’s Intercollegiate Athletic Program with full ride scholarships. Bob continued his passion for coaching with the Women’s Basketball as well as Women’s Cross Country Track & Field with several Final Four Tournament finishes. On January 25, 1969, Bob was united in marriage to Pat Davis in Wahoo, NE. Bob and Pat shared 51 years of marriage prior to his passing. In 1971, Bob went to work at Parson’s College, his alma mater, where he was a Professor and the Associate Athletic Director. Here he started the Women’s Intercollegiate Athletic Program, as well as continued to coach Women’s Basketball and Cross Country Track and Field, where he led his teams to Conference and State Championships. In 1973, Bob was hired at William Penn University as the Associate Athletic Director to start the first Women’s Athletic Program there. He coached Women’s Cross Country, Women’s Basketball, and Women’s Track and Field and is the winningest coach at William Penn. In 1981, they won a National Championship with a 43-3 record as was selected as National Coach of the Year. Bob was also a member of the original “Kodak All American (7 member) Selection Committee. Following his very successful career at William Penn, Bob was hired in 1981, at Fresno State University in Fresno, CA, as a Professor and the Women’s Basketball Coach. Bob was named Nor Pac Conference Coach of the Year and was also the winningest Women’s Basketball coach at Fresno State. Bob remained employed there until 1993 and in 1995, he and Pat retired to Bella Vista, AK. Bob was inducted into the Hall of Fame at the Albia High School, the Carlisle High School, as well as at William Penn University. His amazing career earned him numerous different awards over the years. He was granted the “Lifetime Achievement Award” by the National Women’s Basketball Coaches Association, as well as “National Coach of the Year.” He led his teams to win a National Championship in Basketball, as well as runners-up, and 3rd place finishes in National Championships. He was the first NCAA Women’s Basketball Coach to win 500 games. In addition to coaching, Bob was a member of the selection committee for the first Women’s Olympic team and hosted the first “World University Games” tryouts. He was also a charter staff member of the original “Kodak and Converse National Coaches Clinics. Bob is survived by his wife, Pat Spencer; a daughter, Lisa Spencer; and a sister, Carol (Jack) Maberry. Bob is also survived by several nieces, nephews, cousins, and good friends. He is preceded in death by his parents, John and Wreatha; 2 sisters, Earlene Davis and Rosemary Thomas; and a brother, Richard “Dick” Spencer. Visitation will be held from 9:00 a.m.-11:00 a.m. on Saturday, September 5, 2020, at the Tharp Funeral Home in Albia with Bob’s family present to greet family and friends. According to the rules put in place by the Iowa Department of Public Health, proper social distancing and reasonable personal protective equipment is advised for attending a religious public event. A memorial service will be held at 11:00 a.m. on Saturday, September 5, 2020, at the Tharp Funeral Home in Albia. Burial with military rites provided by the American Legion of Albia, Melrose and Lovilia will follow services at Oak View Cemetery in Albia. A memorial has been established to the Welcome Home Soldier Monument in Albia.

The family of Robert "Bob" Spencer created this Life Tributes page to make it easy to share your memories.

Send flowers to the Spencer family.