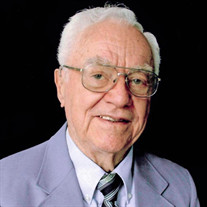 Robert “Bob” Glenn, 97 of Branson, Missouri, former resident of Wapello County, and Albia, Iowa passed away peacefully on February 16, 2022 at home with his wife, and daughters, by his side. Robert was born and raised in southern rural Iowa, where he worked the family farm, and at John Deere in Ottumwa well after graduating. In 1948, Bob joined the Iowa Highway Safety Patrol, stationed in Osceola and Albia. While there, he met the love of his life, Geraldine “Jerrie” Gray. They married in 1951, where recently celebrating 70 years together. Albia is where they made their home for several years and to this union were blessed with two daughters. The family moved to Ames, Iowa after Robert was promoted to Sergeant. Following transfer, Bob was appointed Safety Education Officer of the Iowa Highway Patrol, thereafter heading the Division after his promotion to Lieutenant in 1969, until his retirement in 1981. He spoke at the National Safety Congress, the National School Bus Convention and many other forums. Bob founded the multi-state Uniformed Safety Education Officer's Workshop, being thereafter elected to their "Hall of Fame." He assisted in the formation of RAGBRAI, the statewide bike ride across Iowa, in which he rode several times. Other positions held were President of the Iowa Farm Safety Council, President of the Iowa Safety Association, and membership on the Governor's Committee for Public Health. Robert was an expert marksman with the handgun, serving as an instructor of firearms for new Patrol recruits. In both, in and out-of-state competition, he won many awards for excellence in marksmanship, and a former state revolver champion. During the Iowa State Fair you could spot Lt. Robert Glenn sporting the 1935 IHP uniform britches and boots at the “Hall of Law and Fire.” This was the largest exhibit of combined law enforcers teaching the public about safety and law with the aid of movies, and live demonstrations. The Ames Kiwanis Club recognized him with the “Outstanding Citizen’s Award” for his public and community service. He joined Toastmasters International winning a number of speaking contests, and served as District Governor of Iowa and International Director of the organization. Following retirement, Bob traveled to Ghana and Grenada for the United Methodist Church on missions. Moving to Branson, Missouri in 1985, he volunteered with Salvation Army, American Red Cross and worked as a tour guide for buses visiting Branson. His full life also included bicycling until 90 years of age, tennis instructor for the youth in Branson, and gardening among other activities. A life-long member of The United Methodist Church where volunteering at the church thrift store; helped with the “Ham and Bean” dinners where Bob played clown for several years, and served as Master of Ceremonies for the Branson Senior Center. Enjoying the variety of music shows Branson has to offer, they attended often. Bob and Jerrie loved to travel, traveling the United States, as well as outside its borders, even embarking on a Cruise, while loving every minute! Survived by two daughters, Sheila (Rick) Glenn-Whitford and Kimberly (Steve) Lowry; three granddaughters, Onikah, McKeah, and Kyndall; three great-grandchildren; one brother Gene (Diane) Glenn of Ottumwa, Iowa. Robert was a devoted Christian, caring loving husband, dad, grandpa and friend that will be missed by all that had the pleasure of knowing him. Bob never met a stranger! He enjoyed life and all that it had to offer. Bob’s motto, “Buckle up for safety, buckle up!” A memorial celebration service for Robert, and wife, Geraldine will be held Saturday, March 26th, 2022 at 11:00 a.m. Trinity United Methodist Church, 1117 Benton Avenue E, Albia, Iowa. Interment, after cremation will be in the Oak View Cemetery, Albia, with Iowa State Patrol honors.

Robert &#8220;Bob&#8221; Glenn, 97 of Branson, Missouri, former resident of Wapello County, and Albia, Iowa passed away peacefully on February 16, 2022 at home with his wife, and daughters, by his side. Robert was born and raised in southern... View Obituary & Service Information

The family of Robert "Bob" Glenn created this Life Tributes page to make it easy to share your memories.

Send flowers to the Glenn family.