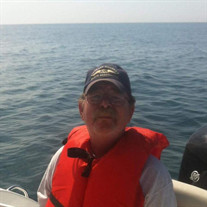 Robert “Bob” John Drake, age 70, of South Haven, Michigan, passed away on November 29, 2017 at Oakwood Specialty Care and Rehabilitation Center in Albia, Iowa. Bob was born on October 5, 1947 to Robert and Grace Drake in Glendale, California. He grew up and graduated high school in California. After graduating he joined the United States Air Force and later served his country in the United States Navy. He was a career man for the military and Bob traveled with his family to be stationed in different parts of the country. After retiring from the United States Navy, Bob worked as a cameraman and master control operator for KCCI News in Des Moines, Iowa. He loved airplanes, lighthouses, working and spending time with his friends and family, especially his grandchildren. He is survived by his children Christopher Lee (Julie) Drake of Johnston, Iowa, Sheila Jeanette (Nate) Gibson of Nevada, Iowa and Alex (Carol) Drake of Albia, Iowa; 14 grandchildren, Sydney, Samantha, Sydney, Skylar, Saydie, Jared, Jenna, Madison, Morgan, Ethan, Averi, Ayden, Marlee and Brooklyn; one great grandchild, Talon and another great grandchild on the way; a sister-in-law, Kathlyn Drake and his caretaker whom he considered a daughter, Crystal Monacelli. Bob was preceded in death by his parents, Robert and Grace; a son, Tony Drake; a granddaughter, Brooke; his brother, Steven Drake and his ex-wife, Ann Drake. As was Bob’s wish his body has been cremated and a celebration of life service will be held on Monday, December 4, 2017 from 6:00 p.m until 8:00 p.m at Brooks Funeral Home located on 7975 University Blvd., Clive, Iowa 50325. The family will be present to greet family and friends. An open memorial has been established in Bob’s name and may be directed to his family at 1045 G Ave., Nevada, Iowa, 50201.

The family of Robert "Bob" John Drake created this Life Tributes page to make it easy to share your memories.

Send flowers to the Drake family.