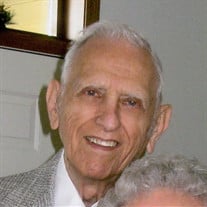 World War II Veteran, Robert “Bob” Lee Burkman, age 95, of Albia, passed away Saturday, September 30, 2017, at the Monroe Care Center in Albia. Bob was born on April 11, 1922, to Richard and Grace (Schwartz) Burkman in Hamilton, Marion County, Iowa. When he was 11, the family moved to Albia where he has resided the majority of his life. He married Kathryn Ann Seibert on October 3, 1942, and they were blessed with 5 children. Upon graduating from Albia High School, Bob joined the U.S. Army in January 1943, reported to Camp Dodge Induction Center, and was assigned to the 527th Engineer Company at Camp Swift in Texas. He attended Army Specialized Training Program (ASTP) at University of Arkansas, where he was awarded the good conduct medal for the year. After a time at Camp Maxey in Paris, Texas, the 324th Engineer BN was sent overseas to the European-African-Middle Eastern Theatre where he served in the Battle of the Bulge. On December 24, 1944, he left his combat group with frozen feet and spent 2 months in the hospital in England. He was then assigned to the Air Corp in England and returned home in December 1945. During his 35 years with the U.S. Postal Service, he worked in the mail on trains, highway post office and in the Des Moines post office. Upon his retirement in 1977, he and his wife moved back “home” to Albia. While living in Des Moines, Bob and Kay along with their daughter, Nancy, owned “Family Affair Ceramics” traveling the state participating in craft shows. Bob was active in his church, Trinity United Methodist, and served on the Hospice Board as well as assisted clients. He recently received his 70 year membership certificate from the American Legion Post 136, and was a member of Veterans of Foreign Wars and National Association of Retired Disabled Veterans of America. Bob enjoyed being a Boy Scout leader and helping with youth programs. He was always quick to help others, both family and friends, when they needed help with a project or they celebrated important occasions in their lives. He was recently honored, by his family, with the State Flag of Michigan at the Welcome Home Soldier Monument in Albia. Bob is survived by his wife of nearly 75 years, Kathryn of Albia; and 4 children, Nancy Newcomb of Des Moines, Rita (Bill) Henderson of Greentop, MO, Roger (Sue) Burkman of Dexter, and Mark (Kathleen) Burkman of Cedar Rapids. He is also survived by one daughter-in-law, Catherine Ann Burkman of Albia, 10 grandchildren, and 15 great-grandchildren. Bob is preceded in death by his parents, Richard and Grace; one brother, Paul; a son, Richard; 2 granddaughters; a great-grandson; and a son-in-law. Funeral services will be held at 11:00 a.m., Tuesday, October 3, 2017, (Bob and Kathryn’s 75th wedding anniversary) at Trinity United Methodist Church in Albia, with Pastor Roger Henry officiating. Burial with military rites provided by the American Legion of Albia, Lovilia and Melrose will follow the service at Oak View Cemetery in Albia. Visitation will begin at 11:00 a.m. until 8:00 p.m., Monday, October 2, 2017, at Tharp Funeral Home in Albia with Bob’s family present from 5:00 p.m.-8:00 p.m. to greet family and friends. Memorials may be made to the Welcome Home Soldier Monument, Trinity United Methodist Church, or donor’s choice and may be directed to the Tharp Funeral Home at 116 Benton Ave. West, Albia, Iowa 52531.

The family of Robert "Bob" Lee Burkman created this Life Tributes page to make it easy to share your memories.

Send flowers to the Burkman family.