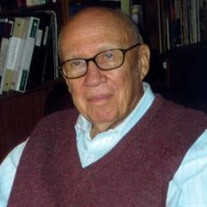 On Sunday, January 6, 2019, Dr. Richard B. Murray, loving husband and father, passed away at age 90. Dick was born December 5, 1928, in Marietta, GA, to William and Ruth (Mozley) Murray. He received a BA from Emory at the age of 18, an MS from Ohio State and his PhD from U Tenn in 1955. In 1956, he married his fellow researcher, Clella Bay, when they were working together at Oak Ridge National Laboratories. They later settled in DE and raised their daughters, Ada Ruth and Annette. As a young man, Richard did physics research at Oak Ridge Nat Labs and the US Naval Research Lab. He was a grantee of AEC, NSF, Dept Energy and a fellow at AAAS and the American Physics Society. Richard was a participant on the founding Board of Directors of ORTEC Inc. in 1960. He invented a detector that incorporated the company’s silicon surface barrier detectors and associated neuron detection system. In the 1960’s, the family moved to Newark, DE where he taught at the University of DE from 1966-1968, was acting chairman of the Physics Dept. from 1975-1976 and then moved into administration and became to Provost, VP Academic Affairs for UD. In 1992, he took a year abroad to be visiting scientist at Clarendon Lab, Oxford U, England. From 1948-1985, he published numerous articles on nuclear and solid state physics. Over the years, Richard provided leadership to many organizations (Trustee for Sanford School, Hockessin, DE, Board Chair for Oak Ridge Assoc. University Foundation, Board member for DE Institute for Med Edu and Research, and a Board member of Southeastern University Research Assoc) as well as being a member of Phi Beta Kappa, Sigma Xi, Sigma Pi Sigma, Phi Kappa Phi and the Cosmos Club. Richard was known by all for his talent and enthusiasm in golfing, his interest in model trains, and his love of hiking and fishing to relax. He always enjoyed a good story, especially a funny one, and was quick to laugh and spread happiness. He sponsored numerous family trips for vacations around the globe (London, Italy, France, Japan) and ensured that his kids and grandkids shared his love of different cultures and their foods. Special places for him included a cottage in the woods of NC, and a beach condo in Bethany, DE where he could watch the family grow and appreciate annual picnics and kite flying. Dick was dedicated to his family and friends who all came to him as a trusted advisor, mentor and confidant. He is survived by his wife of 63 years, Clella Murray; a daughter, Ada Koch and her husband, Kevin and children Megan Schraedley (husband Eric), Gwen and RJ; daughter, Annette Orella and her husband Chuck and children Michael and Frankie. In addition to his parents, William and Ruth, he is predeceased by his siblings WM and Anita. A private family burial will be held at a later date at Hayden Chapel Cemetery in rural Monroe County, Iowa.

The family of Dr. Richard B Murray created this Life Tributes page to make it easy to share your memories.

Send flowers to the Murray family.