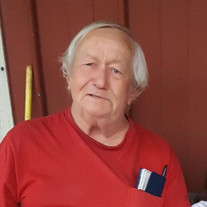 Richard Francis Eastlick, age 79, of Albia passed away on Saturday, May 25, 2019, at Mercy Medical Center in Des Moines, IA. Richard was born on June 12, 1939, at home in Albia to Samuel Sylvester and Agnes Grace (Hornick) Eastlick. He grew up and attended school in Albia, graduating with the class of 1958. He married Sandra Ann Leggett on April 8, 1961, at St. Patrick’s Catholic Church in Georgetown, IA, and to this union, 3 children, Richard Michael, Joseph, and Christine were born. Richard and Sandra shared 42 years of marriage prior to Sandra’s passing on July 21, 2003. Richard worked in assembly at John Deere Ottumwa Works, retiring in March of 1996. Following retirement, he traveled around and assisted with set up for other John Deere plants. Richard also had a cattle and hog operation throughout his adult life. Richard was a proud UAW member. He enjoyed the outdoors, known by many as a mountain man. He was an exceptional gardener who others often turned to in order to gain knowledge for gardening. He liked collecting old Massey Harris tractors, and enjoyed feeding and watching the humming birds. He was a firm believer in the Farmer’s Almanac and loved to pass on folklore to his children and son-in-law. He was an avid Minnesota Vikings fan, faithfully watching games on Sundays and even attending several games over the years. Richard’s true joy in life was spending time with his family and friends and he loved when friends stopped by his red shed to enjoy a cold beer with him. Richard was known for saying, “We aren’t talking politics or religion, death or dying. Let’s drink some beer and have some fun!” Richard is survived by 3 children, Richard Michael “Clint” Eastlick, Joseph (Tina) Eastlick, and Christine (Jody) Milburn; 4 grandchildren, Bryan (Teri) Eastlick and Lindsey, Holly, and Brandon Milburn; 3 great grandchildren, Kennick, Ayden, and Lincoln Eastlick; a sister-in-law, Vivian (Gary) Stafford; and his dog, Spunky. Richard is also survived by several nieces, nephews, cousins, and good friends. He was preceded in death by his wife, Sandra Eastlick; his parents, Samuel and Agnes; 3 siblings, Dorla Wasko and Bill and Bob Eastlick; and a nephew Bryan Dye. Visitation will be held from 1:00 p.m.-8:00 p.m. on Tuesday, May 28, 2019, at the Tharp Funeral Home in Albia, with Richard’s family present from 6:00 p.m.-8:00 p.m. to greet family and friends. A rosary will be held at 6:00 p.m. led by St. Patrick’s Altar and Rosary Society. A Mass of Christian Burial will be held at 11:00 a.m., Wednesday, May 29, 2019, at St. Patrick’s Catholic Church in Georgetown, with Father Mark Yates, C.PP.S. officiating. Per Richard’s wishes, his body will be cremated following services and a private family burial will be held at a later date. A memorial has been established to the family.

Richard Francis Eastlick, age 79, of Albia passed away on Saturday, May 25, 2019, at Mercy Medical Center in Des Moines, IA. Richard was born on June 12, 1939, at home in Albia to Samuel Sylvester and Agnes Grace (Hornick) Eastlick. He... View Obituary & Service Information

The family of Richard Francis Eastlick created this Life Tributes page to make it easy to share your memories.

Richard Francis Eastlick, age 79, of Albia passed away on Saturday,...

Send flowers to the Eastlick family.