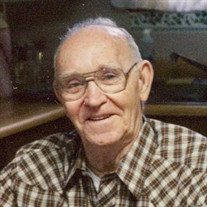 Dick Emerson, age 91, passed away peacefully on Friday, March 10, 2017, under the care of Care Initiatives Hospice at the Monroe Care Center in Albia. Dick was born on February 1, 1926 to Clarence and Dona (Lindsay) Emerson in Okoboji, Iowa. He grew up and attended Arnolds Park High School graduating with the Class of 1944. After high school Dick joined the United States Marine Corps and served his country during World War II. On October 10, 1948 he was united in marriage to Donna Zenor at the Little Brown Church in Nashua, Iowa. To this union 3 children were born, Mark, Tom, and Kathy. Dick and Donna shared 68 years of marriage together. Dick worked as a barber for his entire working life. He enjoyed his job and always tried to keep himself busy. Dick never knew a stranger and enjoyed conversing with anyone who would sit and talk. He was a member of the Masons and a lifetime member of the American Legion Howard Cessna Post #136 in Albia. His real joy in life was spending time with his friends and family. Dick is survived by his children, Tom (Linda) Emerson of Virginia Beach, Virginia, Kathy Martensen of Cedar Rapids and Mark (Silvia) Emerson of Albia; five grandchildren, Christopher Emerson, Michael Emerson, Kristin Rumelhart, Erin Young and Melissa Emerson and two great grandchildren, Ella Young and Rowan Rumelhart. He is also survived by many nieces, nephews, and cousins. He was preceded in death by his parents, Clarence and Dona and 9 brothers and sisters. Funeral services will be held at 12:00 p.m., Monday, March 13, 2017, at the Tharp Funeral Home in Albia, with Pastor Roger Henry officiating. Burial with military rites provided by the American Legion of Albia, Melrose and Lovilia will follow the service at the Oak View Cemetery in Albia. Visitation will be held from 10:00 a.m until service time at 12:00 p.m. Monday, March 13, 2017, at the Tharp Funeral Home in Albia, with Dick’s family present to greet family and friends. A memorial has been established to the Alzheimer’s Association.

Dick Emerson, age 91, passed away peacefully on Friday, March 10, 2017, under the care of Care Initiatives Hospice at the Monroe Care Center in Albia. Dick was born on February 1, 1926 to Clarence and Dona (Lindsay) Emerson in Okoboji,... View Obituary & Service Information

The family of Richard "Dick" LuVerne Emerson created this Life Tributes page to make it easy to share your memories.

Send flowers to the Emerson family.